Back in 2017, a media report stated that Hrithik will co-star with Shruti Haasan in an AR Murugadoss-directed film 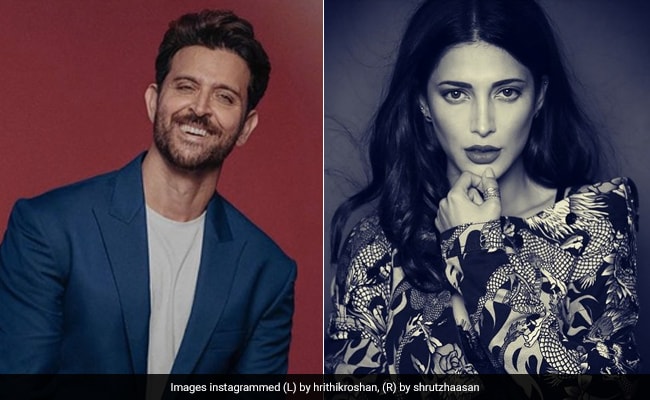 Actress Shruti Haasan, on Wednesday, revealed that she had a "crush" on actor Hrithik Roshan when she was in school. The 35-year-old interacted with her fans on Twitter yesterday and responded to this query from a fan: "Who was your crush in your school days?" In her reply, Shruti Haasan wrote: "Hrithik Roshan and Leonardo DiCaprio." When another user, during the Q/A session, asked the actress about any film or collaboration with Hrithik Roshan, she replied: "Fingers crossed." Back in 2017, a media report stated that Hrithik will co-star with Shruti Haasan in an AR Murugadoss-directed film. However, neither the stars nor the makers reacted to the report.

Shruti Haasan answered many questions about her personal life and professional one during the interaction session on Wednesday. When a user asked if she has any "regrets" in her life, the actress responded: "Some but not really to be honest everything is a learning experience."

Some but not really to be honest everything is a learning experience https://t.co/yEn79MObEp

Shruti Haasan has again started sharing glimpses of her lockdown life. On Wednesday evening, she posted a video of herself baking a cake and wrote: "Here's a cake to celebrate the festivities lock down style !! Happy to everyone! PS - the cake was slightly cracked cause it's gluten free but any of you who know me know I loved cracked people and things. PPS- do not over whip the frosting else it will curdle into yucky."

Shruti Haasan is the daughter of south superstar Kamal Haasan. She is an actress and a singer. Shruti Haasan has featured in Hindi, Telugu and Tamil films like Anaganaga O Dheerudu, Balupu, Race Gurram, Aagadu, Luck and Katamarayudu.