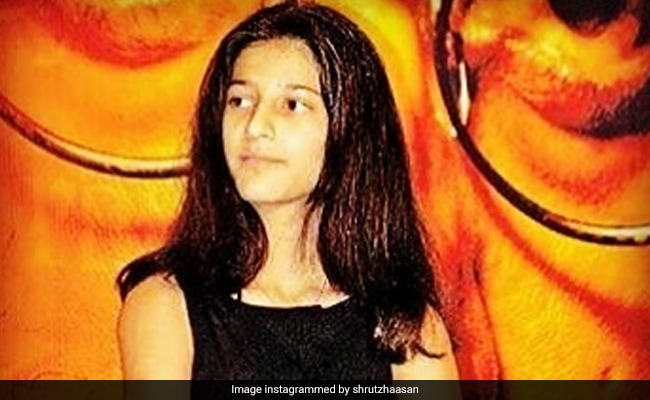 Shruti Haasan sure knows how to tickle our funny bone with her quirky captions on social media. The reason we are saying this is because, on Tuesday, the actress posted a picture from her teenage days and accompanied it with an ROFL caption. Before you read further, did you know that Shruti Haasan is pretty good at making the "judgy, mildly disinterested face"? She herself revealed this in her post, sharing which she wrote: "Excelling at the judgy, mildly disinterested face since I was 14" and added "But my heart was full of" with heart and flower icons. In the picture, a much younger version of Shruti Haasan can be seen sporting a black top and posing against what appears to be a poster.

In a separate post on Wednesday, the actress shared a glimpse of her life in lockdown. Alongside a picture of herself smiling, Shruti Haasan wrote: "Lock down mode on - cleaning - creating - sanitising - smiling through it all."

Shruti Haasan is currently dating doodle artist and illustrator Santanu Hazarika. The actress recently posted an illustration of her made by Santanu. "Thank you Santanu Hazarika for this most beautiful gift," read an excerpt from her post.

Shruti Haasan is a singer, as well as an actor. She began her career in the music industry by singing the track Potri Paadadi Penne for her actor father Kamal Haasan's film Thevar Magan at the age of 6. Post that, she has sung several songs for her father's films, including Chupadi Chupadi Chaachi for Chachi 420, Ram Ram Hey Ram for Hey Ram and Allah Jaane, Unnaipol Oruvan and Vaanam Ellai for Unnaipol Oruvan.