Shruti And Kamal Haasan's Jamming Session Is Adorable Beyond Words

Shruti and Kamal Haasan jammed in Los Angeles. Shruti shared a snippet, which is absolutely hilarious 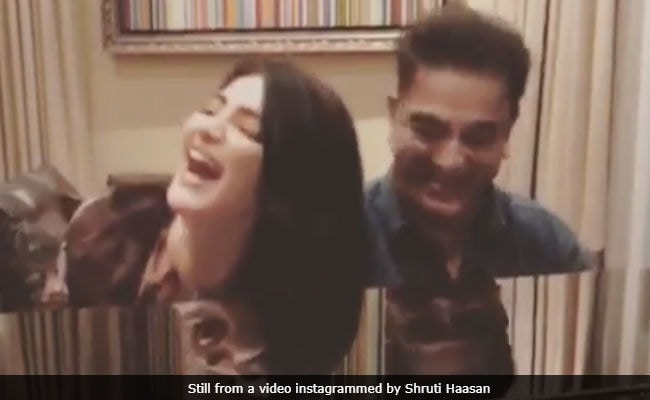 New Delhi: Shruti Haasan and her father Kamal Haasan were jamming together and a clip of their music session was shared by the former on her Instagram account. "Such a fun evening singing with my daddy dearest," she captioned the post. In the mini-clip shared by Shruti, Kamal Haasan plays a piece on piano, which makes Shruti ROFL. Kamal Haasan's expression is priceless and it will put a smile on your face too. Can we say, 'Sabaash Naidu!' Take a look at Shruti and Kamal Haasan's adorable video here:

Shruti Haasan recently told mid-day that she will concentrate on music instead of films this year. "As an artiste, I can't be constricted. It is essential that I constantly keep reinventing myself. This year will see me come up with my own singles." Shruti Haasan has starred in several Hindi, Tamil and Telugu films. "Three industries and multiple films simultaneously were leaving little time for me to find myself. People were forming opinions about me, almost to the point of pigeonholing and that's the last thing I want," Shruti told mid-day.

Shruti Haasan has also composed music films such as Unnaipol Oruvan and Eenadu. Shruti has doubled as a playback singer for tracks such as Kannulada in the Telugu version of 3 and Aazma in Hindi film Luck.

Promoted
Listen to the latest songs, only on JioSaavn.com
Shruti Haasan was also the playback singer of Jaago Gori and Ram Ram Hey Ram - tracks from Kamal Haasan's Chachi 420 and Hey Ram, respectively.

Shruti and Kamal Haasan are also making Sabaash Naidu together, which is also directed by Kamal Haasan.