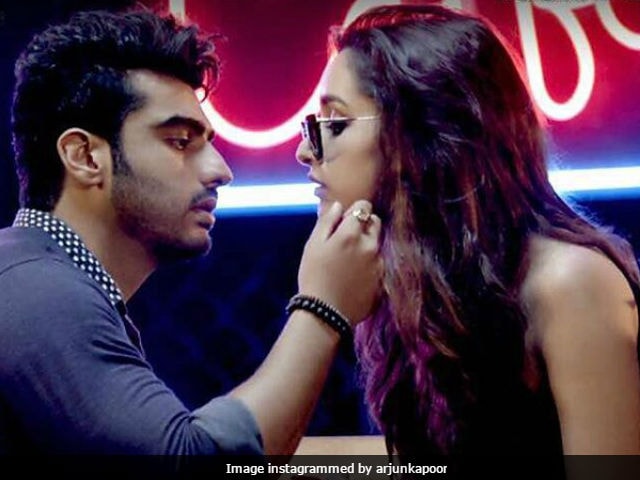 New Delhi: Arjun Kapoor and Shraddha Kapoor are busy promoting their upcoming film Half Girlfriend, directed by Mohit Suri. The 31-year-old actor recently shared a hilarious picture imitating a scene from the film Andaz Apna Apna with the Baaghi actress on social media. In the picture, the Aurangzeb actor can be seen holding a corner of Shraddha Kapoor's dress. The image has been captioned: "Arre GOGO ji aapka ghaagra !!! @shraddhakapoor #shaktichiporgi #Halfgirlfriend #19thmay #promtionmadness(sic)." In the last scene of 1994 movie Andaz Apna Apna, Aamir Khan used the same dialogue for Shakti Kapoor, Shraddha's father, who portrayed the role of Crime Master Gogo.

See the picture posted by Arjun Kapoor below:

Andaz Apna Apna also featured Raveena Tandon, Karisma Kapoor and Paresh Rawal in lead roles. The film, which did an average business at the box office, is one of the most popular movies among all.

Half Girlfriend, which is scheduled to release in theatres on May 19, is based on Chetan Bhagat's novel of the same name. In the film, Arjun Kapoor will be seen portraying the role of Madhav Jha, a man who hails from Patna, Bihar. Shraddha Kapoor will portray the role of Riya Somani, a Delhi-based student.

Half Girlfriend marks Shraddha Kapoor's third collaboration with filmmaker Mohit Suri. They have previously worked together in films like Ek Villain and Aashiqui 2.

Promoted
Listen to the latest songs, only on JioSaavn.com
Arjun Kapoor was last seen in R Balki's Ki and Ka opposite Kareena Kapoor. He will next feature in Anees Bazmee's Mubarakan along with Anil Kapoor, Ileana D'Cruz and Athiya Shetty. The film is slated to release on July 28.

Shraddha Kapoor was last seen in Ok Jaanu, co-starring Aditya Roy Kapur. She will next feature in Apoorva Lakhia's Haseena: The Queen of Mumbai.