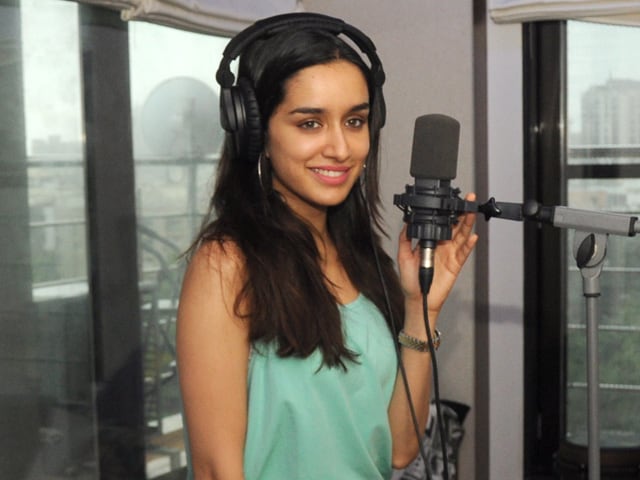 Shraddha Kapoor at a recording studio in Mumbai

Mumbai: Bollywood actress Shraddha Kapoor's soothing voice in songs like Galliyan and the recent Bezubaan Phir Se has been well appreciated by listeners. Shraddha now hopes to impress composer trio Shankar-Ehsaan-Loy with her singing skills in Rock On 2.

At the cover launch of a magazine, Shraddha said: "I just enjoy singing and I'm not professionally trained. But I just love singing. And I'm hoping that with these classes, my singing improves further."

The Ek Villain actress is taking voice modulation classes to calibrate her voice for Rock On 2."I'll be recording with Shankar-Ehsaan-Loy and I hope that while recording, they are smiling that I have taken good training for my voice. I'm just hoping that they are happy with my voice," said Shraddha.

The 26-year-old actress will be featured opposite actor-filmmaker Farhan Akhtar in the film.

When Shraddha was asked about her experience of working and singing with Farhan, she said: "It was a great experience. This is the first time I have rehearsed with him. I have been very excited to work with Farhan Akhtar and finally I'm getting the opportunity to work with him. Looking forward to record with him."

Though Shraddha's rendition of Galliyan from Ek Villian and Bezubaan Phir Se from ABCD 2 connected instantly with the audience, they were not originals considering the male versions of the songs were released first and later became chartbusters.

Meanwhile, Shraddha will also be seen in Sajid Nadiadwala's Baaghi opposite Tiger Shroff.