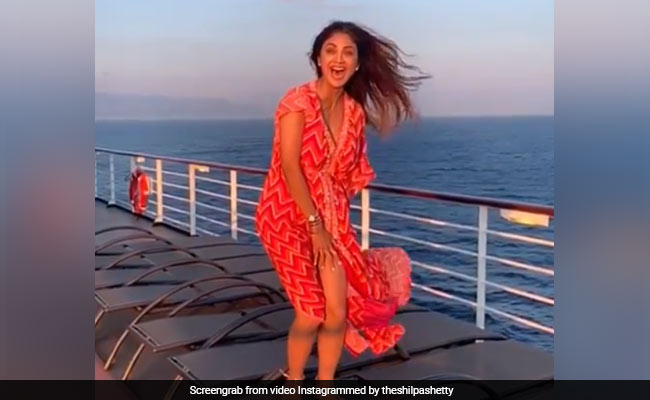 Shilpa Shetty in a still from the video. (Image courtesy: theshilpashetty)

Shilpa Shetty never fails to amaze her fans with her interesting posts and her latest Instagram entry is not an exception. The 44-year-old actress posted a throwback video, which appears to be from a vacation. In the video, Shilpa, dressed in a printed orange dress, can be seen replicating Marilyn Monroe's iconic flying dress pose. She captioned the post: "My 'Marilyn Monroe' moment on the cruise wasn't exactly a breeze. Please watch till the end." She added the hashtags #throwback, #bloopers, #funtimes,#vacation #cruising, #slomo, #laughs and #epic to her video. The video has over 18 lakh views on Instagram and we are not surprised at all.

Shilpa Shetty is a fitness enthusiast but she frequently uploads posts pertaining to healthy eating interrupted by pictures and videos of her 'binge eating' on social media. Take a look at some of the posts here:

Circuit training... 3-and-a-half-minute killer set made concise to #instafit. 3 sets of this and legs are jelly. Sore today, Strong tomorrow Didn't stop even when Bruno, our German Shepherd, wanted to be a party pooperHe's adorbs! @bencolemanfitness you are killing me #mondaymotivation #killerworkout #circuittraining #legday #fitness #passion #swasthrahomastraho #healthfreak #breathe

Expectation vs Reality!!! To all those people who think I don't enjoy my dessertLemme tell you I earn my #SundayBinge and indulge with #Pride. No sugar during the week and eat anything u want on Sunday guilt free. #Celebrate and #Eat with #Gratitude . This video was my Hubbys take on my critics Ps:This video was just meant to be on our Family chat( we have one @Rajkundra9 you are #hilarious Can't believe u did this Have a laugh guys... Enjoy !! #sundaybinge #Sunday #takingthemickey #eatwithgratitude #enjoy #realitybites #pride #lovefood #cheatdays #laughs #londondiaries

Basking and binging in the beauty of Venice ..Had the freshest tastiest tiramisu ever ..Like they say.. Molte bene!! #venice #italy #cruising #gratitude #family #famjam #holidays #sundaybinge #cipriani

Shilpa Shetty had been actively posting pictures and videos from her London getaway, where she was accompanied by her entrepreneur husband Raj Kundra and her son Viaan Raj Kundra.

At one with Nature.. What a beautiful world. I'm aware these animals are wild.. but probably more compassionate than us humans. Think they are used to seeing us humans in their habitat , they consider us to be wild!! #givelovegetlove #nature #londondiaries #love #gratitude #conserve #wildlife #busheypark

Shilpa Shetty made her Bollywood debut in the 1993 film Baazigar, which also featured Kajol and Shah Rukh Khan. She has featured in films such as Main Khiladi Tu Anari, Dhadkan, Life In A...Metro, Apne and Dus, to name a few.