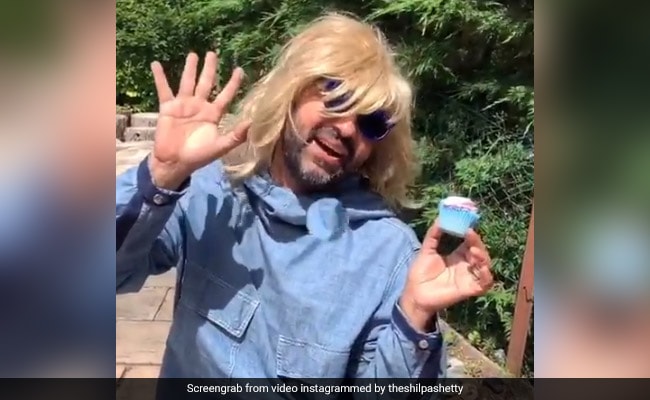 A still from the video posted by Shilpa Shetty. (Image courtesy: theshilpashetty )

Raj Kundra's epic take on Shilpa Shetty's Sunday binge videos is the most hilarious thing you will come across on the Internet. Shilpa, who is one of the fitness enthusiasts of Bollywood, frequently shares her Sunday binge videos with her fans on Instagram but it is her latest video, in which Raj Kundra can be seen mimicking his wife, which celebrities such as Geeta Kapoor and Terence Lewis are calling "the best" till now. However, going by the comments section, it seems like Raj Kundra is quite "embarrassed" on Shilpa posting the video, meant only for "family chat," on social media but more on that later. In the video, Raj Kundra can be seen donning a white wig and savouring some unicorn cupcakes, which he reviews but later pukes, of course a pinch of humour! Also, Raj Kundra and Shilpa Shetty's son Viaan's special appearance in the clip cannot be missed.

Sharing the video, Shilpa wrote: "Expectation vs Reality! To all those people who think I don't enjoy my dessert, let me tell you I earn my #SundayBinge and indulge with #Pride. No sugar during the week and eat anything you want on Sunday guilt free. Celebrate and eat with gratitude. This video was my Hubby's take on my critics. PS: This video was just meant to be on our Family chat (we have one). Raj Kundra, you are hilarious. Can't believe you did this."

Expectation vs Reality!!! To all those people who think I don't enjoy my dessertLemme tell you I earn my #SundayBinge and indulge with #Pride. No sugar during the week and eat anything u want on Sunday guilt free. #Celebrate and #Eat with #Gratitude . This video was my Hubbys take on my critics Ps:This video was just meant to be on our Family chat( we have one) @Rajkundra9 you are #hilarious Can't believe u did this Have a laugh guys... Enjoy !! #sundaybinge #Sunday #takingthemickey #eatwithgratitude #enjoy #realitybites #pride #lovefood #cheatdays #laughs #londondiaries

Replying to the post, Raj Kundra said that he will never post a video on their family chat again. LOL. "I can't believe you posted this! That's the last time I am posting a video on the family chat! So embarrassing," he commented.

While Raj Kundra found the video "embarrassing," other celebrities such as Farah Khan, Geeta Kapoor, Terence Lewis, Sameera Reddy and Gaurav Gera found it extremely funny. Farah Khan was so impressed that she wrote: "Can I sign him please?", Geeta Kapoor commented: "He did it better... Superb," while Terence Lewis wrote: "Best Sunday binge ever! ROTF." Here's what all of them commented:

Mother of all #sundaybinge s..today is a belated #birthdaybinge turned into a #mahabinge according to @parineetichopra After we had all eaten we all looked like #golmaal according to @khemster2 .. You cannot be forgiven for today @chefkelvincheung , #blueberryfrenchtoast #pancakes #brownbuttercookies #donuts #pancakes but that #kelcake was #cray freakin awesome . Today was death by dessert .. according to me! Soooo much to celebrate.. what the heck!! Will sleep in the gym tomw #sundaybinge #sunday #bastian #sweettooth #happy #foodporn #sugarhigh #awesome

Shilpa Shetty and Raj Kundra got married in the year 2009 and they are parents to 7-year-old son.