Shilpa Shetty Took The #DollyParton Challenge. Her 'Tinder' Grid Is Our Favourite

"Passing up the rest because I'm taken by the best," wrote Shilpa Shetty 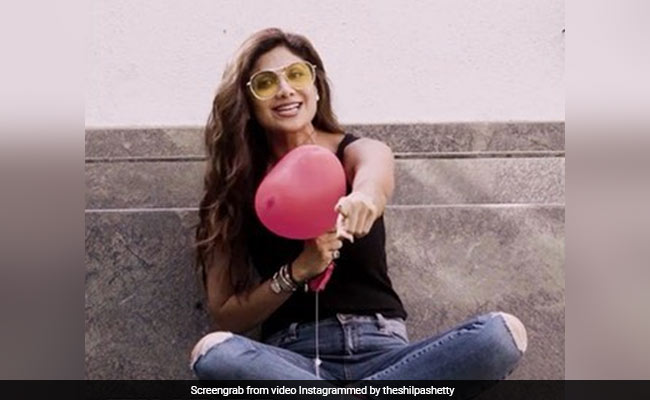 The Internet is bombarded with posts pertaining to the #DollyParton challenge and seems like the trend is keeping Bollywood stars busy as well. Shilpa Shetty is the latest addition to the list of stars to take the viral social media challenge. As a part of the challenge, actors are sharing collages of four different pictures of themselves from different social media platforms - LinkedIn, Facebook, Instagram and Tinder. Keeping up with the nature of each platform, Shilpa posted drastically different albeit equally interesting GIFs. The first GIF that Shilpa posted happens to be from a crowd interaction. The Facebook column features a video of Shilpa practicing yoga. The Instagram GIF showcases Shilpa's love for food (just like her Sunday brunch posts). In the final (and our favourite) GIF, Shilpa can be seen bursting heart-shaped balloons. She tagged her husband Raj Kundra on her post and captioned it: "Passing up the rest because I'm taken by the best." She added the hashtags #DollyPartonChallenge #SwasthRahoMastRaho to the post.

So far, Arjun Kapoor, Sara Ali Khan, Sidharth Malhotra and many others have taken the viral challenge. Check out their posts here:

Insta is my A game Tinder for the flame For Linkedin one can try to be tame FB for those throwbacks, no shame Different personalities, but Sara's still the same Sara ka Saara Sara @pumaindia

A man with a plan, family, attitude & hope

Ayushmann Khurrana added another category to his collage, which featured stills from his film Bala and Dream Girl. This is what we are talking about:

As you know I am a man of many expressions!! Many a time I am asked why I pout so much! Well I don't have an answer to that! I pout as soon as a camera is within 10 feet of me! I can't help myself! It's an inbuilt mechanism that activates itself on its own and no amount of requests for a smile or a candid laugh can take my pout away from me! It's a part of my lip till fillers replace it...It's now a part of my personality! I suck my cheeks, squint my eyes...pretend I am Brad Pitt ( in my head) and Voila! You have a 47 year old man who thinks he is Paris Hilton! ( also known as a midlife crisis) ...I am happy! So please don't rain on my pout parade!

Shilpa Shetty made her Bollywood debut in the 1993 film Baazigar, which also featured Kajol and Shah Rukh Khan. She has featured in films such as Main Khiladi Tu Anari, Dhadkan, Life In A...Metro, Apne< and Dus, to name a few.