Inside Shilpa Shetty's Christmas Lunch In London: She Had To Start Cooking A Day Before. Imagine The Spread

"Now you know why we start cooking from the previous day... all homemade," Shilpa Shetty wrote on Instagram 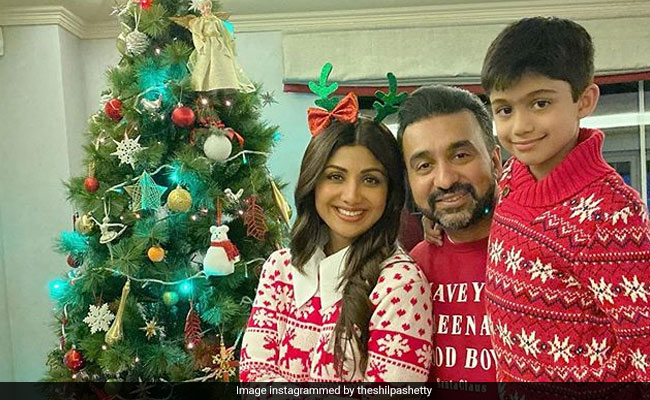 Actress Shilpa Shetty celebrated Christmas this year in London and shared fun-filled glimpses of before and after moments of the Christmas lunch she hosted on Instagram. The 44-year-old actress revealed she had not one, two or three but seven desserts on her Christmas lunch menu with an adorable boomerang video, in which Shilpa's son Viaan and sister Shamita Shetty can be seen interrupting her in the kitchen. But all is allowed because it's Christmas after all! In the following post, Shilpa gave us a tour of the delectable spread she had for her Christmas lunch, including Christmas regulars such as roast chicken and turkey.

Shilpa Shetty was also joined by her mother Sunanda Shetty and designer-friend Manish Malhotra, who found mention in the rather hilarious video and its caption. "Christmas lunches be like... Now you know why we start cooking from the previous day... all homemade. Manish Malhotra, now you can start on your diet from tomorrow... ha ha ha," wrote Shilpa.

Christmas lunches be like ... Now u know why we start cooking from the previous day..all #homemade @manishmalhotra05 now u can start on your diet from tomorrow.. ha ha ha #love #gratitude #friends #home #christmas #christmaslunch #happiness #together #christmasspirit #trimming #brusselsprouts #turkey #food #foodcoma

Meanwhile, this is what happened in the kitchen before: "A little "two" merry. Grrrrrr. But more the merrier... it's Christmas! Cooking up a storm... seven desserts on the menu for Christmas lunch," she wrote.

Shilpa Shetty, Raj Kundra and Viaan also sent a customary Christmas greeting card from London for her fans and followers: "With love filled hearts we wish you a Merry Christmas from us to yours."

With love filled hearts we wish you a Merry Christmas from Us to Yours ... #love #gratitude #peace #family #happiness #smiles

Shilpa Shetty and Raj Kundra celebrated their 10th anniversary in November this year. On the work front, Shilpa Shetty is busy with the film Nikamma, which is scheduled for release in summer 2020.