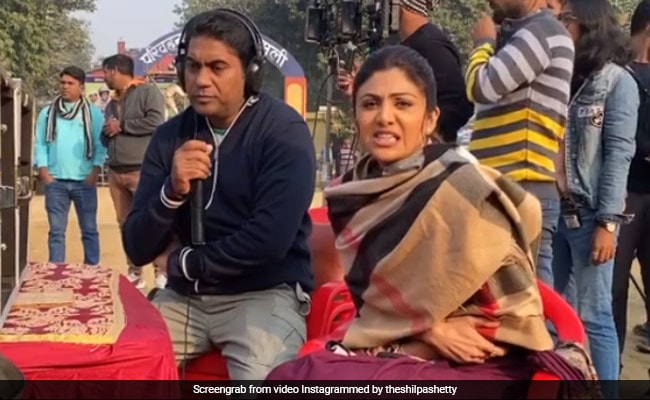 Shilpa Shetty in a still from her video (courtesy theshilpashetty)

Shilpa Shetty is not too pleased with the weather situation in Lucknow, especially if she has to shoot in a "cotton saree." The shooting schedule of Sabbir Khan's upcoming movie Nikamma has taken the 44-year-old actress to Lucknow. Shilpa Shetty told us that shooting in the mornings there means dealing with "15 degree temperature" in a hilarious Instagram video shared with the caption: "Cold director. Colder weather!" LOL. In the video, Shilpa hilariously trolls director Sabbir Khan, who can be seen sitting in the director's chair, supervising a shot. Shilpa, who is seated right beside him on sets, evidently shivers as she says: "15 degree temperature. Director in a sweater, artiste in a cotton saree," and hilariously adds: "Nikamma" to describe her director. Sabbir Khan, clearly aware of Shilpa's on-set shenanigans, responds with an epic eye-roll.

Nikamma is a romantic comedy, which also stars Abhimanyu Dassani and Shirley Setia. This film marks Shilpa Shetty's return to screen after over a decade. She was last seen in the big screen in 2007 film Apne. Speaking about returning to films after 13 years, Shilpa Shetty had earlier told news agency IANS: "I think once an actor always an actor, and once you taste the blood you cannot stay away from it for a long time."

About her role in Nikamma, Shilpa said she will be seen in a "different manner": "I feel Sabbir Khan who is the director of the film is presenting me in a different manner so, I am really excited for it."

Nikamma is scheduled for release in summer 2020.