Shilpa Shetty Picked This OOTD Because She's "Not Just One Colour" 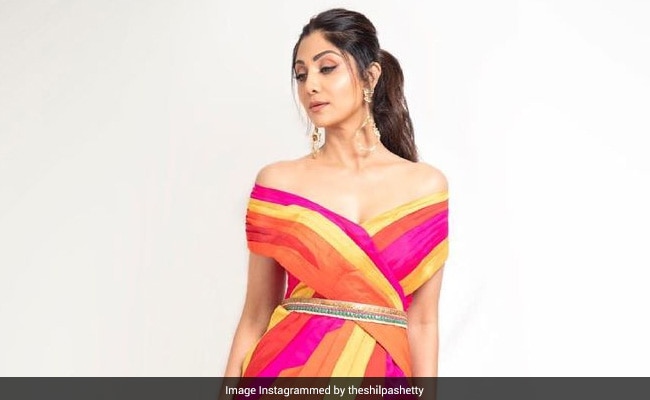 Actress Shilpa Shetty, on Friday, added a pop of colour to our Instagram feeds with a new picture of herself. The 45-year-old actress can be seen dressed in a stunning multi-coloured dress that had a front slit. Shilpa paired the dress with a silver belt around her waist. She completed the look with magenta heels and a high ponytail. In the caption of the post, Shilpa Shetty said that her personality cannot be defined by "just one colour" because she is "the rainbow." Well, we can't agree more as her latest picture is a proof enough. "I'm not just one colour... I'm the Rainbow," she wrote in the caption. Through the hashtags of the caption, Shilpa Shetty also shared that the dress is her outfit of the day (OOTD) for the shoot of the show Super Dancer - Chapter 4. She currently serves as one of the judges on the show. "#SuperDancerChapter4 #NachpanKaTyohaar #OOTD #gratitude #blessed #happiness #hues #rainbow," she wrote in the caption.

Choreographer Geeta Kapur, who is also a judge on Super Dancer - Chapter 4, dropped a comment on Shilpa's post and heaped praises on her. "One that can make many lives colourful... just like u do mine!! Love u Shetty," Geeta Kapur wrote in the comment.

Recently, Shilpa occupied a spot on the list of trends after a video from the sets of Super Dancer - Chapter 4 went viral. The video features her with her Dhadkan co-star Suniel Shetty. In the video, the duo can be seen recreating their iconic song Dil Ne Ye Kaha Hai Dil Se from the 2000 film Dhadkan.

On personal front, Shilpa has recently welcomed a new adorable puppy in her family. The little furball was a gift from the actress to her son Viaan on his 9th birthday.

Coming back to her professional life, Shilpa Shetty is all set to make a comeback to films after a gap of 13 years. She will be seen in Sabbir Khan's Nikamma. She will also be seen in Hungama 2, co-starring Paresh Rawal and Meezan Jaafrey.