Shilpa Shetty Is A Mother Of Two Or Three? Her ROFL Answer

"I'm a mother of two now, actually three - one who is acting like his shoe size - my husband," said Shilpa Shetty 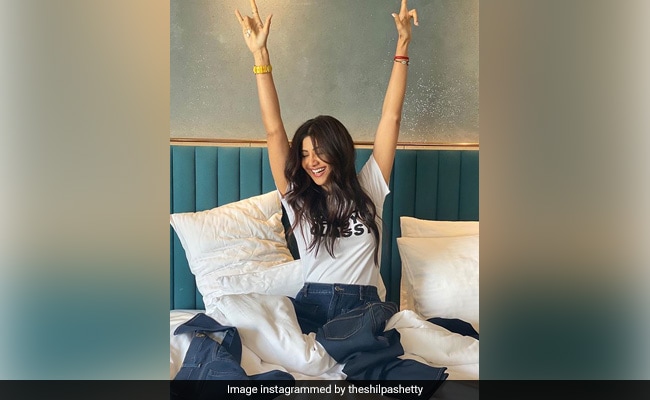 Actress Shilpa Shetty, who is known for her signature sense of humour, was a guest on a recent episode of Neha Dhupia's talk show. Glimpses of the chat show have been shared on Instagram and the revelations Shilpa made will crack you up. Shilpa Shetty is married to businessman Raj Kundra and the couple are parents to two kids - Samisha and Viaan. During the conversation, Neha appeared to suggest that there was a lot of commotion while setting up Shilpa's mic for the interview at her home and asked Shilpa how she is doing with the new work-from-home setting. "I'm a mother of two now, actually three - one who is acting like his shoe size - my husband. I'm a mess," was Shilpa's ROFL reply.

Talking to Neha, Shilpa assigned complete credit to Raj Kundra for being the more proficient business-person in the house: "There's a very clear demarcation when it comes to business acumen - he clearly aces over there. I'm terrible. I only know how to make money but I don't know what to do with it."

Today was dedicated to the man who is a true representative of who a 'partner' should be. He fasts with me( since 11 years) stands by me through thick & thin, and makes life beautiful in the most amazing ways imaginable. Thank you for everything, @rajkundra9. I love you, Cookie ❤️???????????????? Happy Karva Chauth!???????? . . . . . #KarvaChauth2020 #husbandandwife #partners #bestfriends #blessed #gratitude #family

In terms of work, Shilpa Shetty was seen as one of the judges on the TV reality show Super Dancer Chapter 3. She is making her comeback to films after a gap of 13 years with Sabbir Khan's Nikamma.