Shilpa Shetty Finally Achieved This Workout Routine: "It Is No Mean Feat"

“A great start to the day and the week,” Shilpa Shetty wrote in the new post. 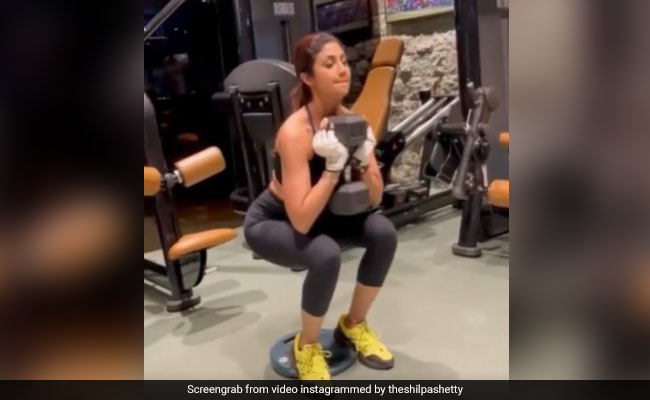 Shilpa Shetty is one of the fittest actresses in the country today. A quick glance at her social media profiles will show you why this is the case. From a healthy diet and meditation to complex workout routines, the actress makes sure that she pays equal attention to her physical and mental health. This Monday, too, Shilpa Shetty began her week on a fit note, by pulling off a complex workout in the gym. And acknowledging that it is, in fact, difficult to muster the motivation to get up and workout, Shilpa Shetty said, “You don't find willpower, you create it.”

In the caption, Shilpa Shetty further said, “When you put your heart and mind to something, anything is possible. I'd been aiming to achieve this for a while now, and it has finally happened. It may look easy, but the 20-kg weighted squat is no mean feat. It helps strengthen the glutes, thighs, hamstring, calves, core, knee joints, and lower back. It also helps burn fat. A great start to the day and week.”

Reacting to it, director Tahira Kashyap dropped a heart and muscle emoji.

Last week too, Shilpa Shetty shared a similar clip from her working diaries. In the video, the actress also gave us a sneak peek of her brand new, bold hairstyle. The actress showed off her “undercut buzz cut” look while performing the aerobic workout.

Sharing the video, Shilpa Shetty wrote, “You can't live each day without taking risks and without getting out of your comfort zone: be it going for an undercut buzz cut (which took a lot of gumption, won't lie) or performing my new aerobic workout: the ‘Tribal Squats'. It works on all lower-body muscles, shoulders, arm-and-leg coordination, speed and agility, and most importantly - on our brain & body. The routine entails doing 4 sets of 60 seconds each with only a 30-second break in between each of them.”

Inspiring her followers to put their best foot forward, Shilpa Shetty wrote, “Put in the effort consistently to see the difference because like they say, “No Guts, No Glory.”

As fans of the actress praised her for the new look, Shilpa Shetty also uploaded a video of her getting the haircut. “How it happened,” she wrote adding that the hairstylist was “more scared” than she was.

So what do you have to say about Shilpa Shetty Kundra's workout videos?