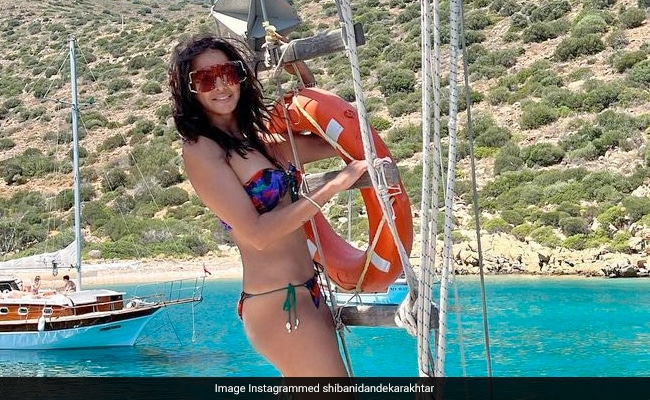 Shibani Dandekar loves the ocean and everything related to it. The actress-TV host is also an avid traveller. A cursory glance at Shibani's social media handles will prove this to you. And now, Shibani has added to her album of pictures from the sea by sharing a new post. In it, she is posing on a boat, dressed in a swimsuit and looking absolutely pleased. Sharing the image, Shibani declared, “Boat girl,” and added a little girl and a boat emoji. Needless to say, Shibani's new photo has impressed her fans on Instagram, who have flooded the comments section with compliments.

Shibani Dandekar's happy image comes just days after her husband, actor-director Farhan Akhtar gave us a glimpse of the couple's vacation in the Maldives. In the video shared by Farhan, the couple is dancing on the beach. Following this, they even set out into the sea for a scuba diving session.

While in the Maldives, Farhan Akhtar and Shibani Dandekar also swam amidst the island's rich aquatic wildlife. And even a shark sighting did not stop the couple from stopping for a hug and kiss under the blue waters.

Reacting to the post, Arjun Rampal said, “Wow,” with a heart-eye emoji.

Here's another image of Shibani Dandekar enjoying the Sun, the sand and the sea in the Maldives. Dressed in a white flowy dress, Shibani looks lovely as always in the picture which she captioned, “Sky above, sand below, peace within.”

Farhan Akhtar and Shibani Dandekar got married in February, this year in a dreamy ceremony. The wedding was an intimate event with only friends and family in attendance.

On the work front, Shibani Dandekar revealed during an Instagram AMA session that she will be wearing the producer's hat for her next project. She, however, did not share any details of the project. Meanwhile, Farhan Akhtar was last seen in the Marvel Cinematic Universe web series, Ms Marvel.