Shershaah Review: Sidharth Malhotra Has What It Takes But A War Hero Deserves A More Energetic Film

Shershaah Review: Given the tone and treatment, Captain Vikram Batras exploits as an officer and a gentleman add up to a narrative that resorts more to broad strokes than to delving into the evolution as the extraordinarily brave man he became. 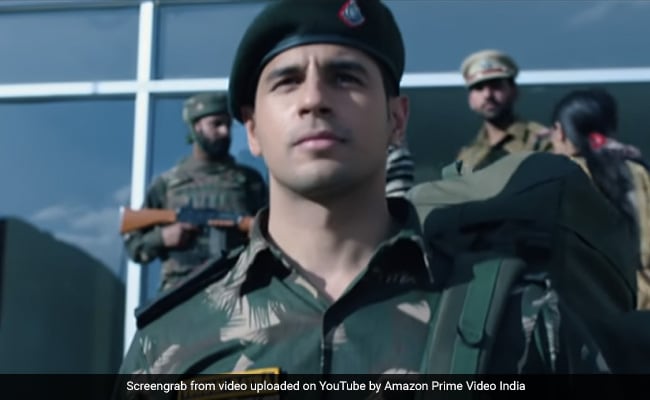 The first thing that springs to mind as Shershaah unfolds is this: a war hero deserved a far more engaging and energetic film. It is a suitably solemn, restrained account of the brief life and career of a 25-year-old Army Captain who died fighting in the 1999 Kargil war, but it takes inordinately long to get anywhere near full throttle.

Given the tone and treatment that Shershaah opts for, Captain Vikram Batra's exploits as an officer and a gentleman add up to a narrative that resorts more to broad strokes than to delving into the nuances of the titular hero's evolution as the extraordinarily brave man he became.

The protagonist's identical twin is the narrator of the story but he, like the rest of the soldier's family, is relegated to the periphery of the plot, a creative decision that prevents Shershaah from becoming an overarching tale that straddles the exceptional courage of the martyr as well as the fortitude of his parents and siblings.

The Vishnu Varadhan-directed war film, co-produced by Karan Johar's Dharma Productions and streaming on Amazon Prime Video, strings together pieces of a life carved out of documented details and arranged within a drearily linear structure.

Lead actor Sidharth Malhotra has what it takes to flesh out a real-life martyr who has left behind a larger-than-life aura, but the evolution of the character's tough-as-nails personality that lies at the base of his battlefield derring-do is delivered in the form of shallow, trite driblets.

Captain Batra, codenamed Shershaah ahead of a key operation during the Kargil war, gave the world the catchline "Yeh dil maange more". The movie about him and his brief life, sadly, does not possess the propulsive power to leave you asking for more.

On the face of it, Shershaah, scripted by Sandeep Shrivastava, looks to tap into the tragedy of a life cut short by war, as also into the guts and glory inherent in Captain Batra's supreme sacrifice. It, however, uses unadventurous methods to craft a story that, in large measure, has been in the public domain for two decades and a bit. So, there aren't any startling revelations that Shershaah has in store for the audience.

As a boy yet to step into his teen years, Vikram fights off a bully who refuses to return a cricket ball. His father, a schoolteacher in Palampur, Himachal Pradesh, takes his son to task and wonders if he will end up a ruffian. Unperturbed, Vikram pipes up: "Meri cheez mere se koi nahi chheen sakta (Nobody can snatch what belongs to me)."

It is a natural progression from there on. The late 1980s television series Param Vir Chakra, especially an episode on Palampur's Major Somnath Sharma, the first recipient of India's highest gallantry award, casts a spell on Vikram.

The boy begins to wear battle fatigues to parties and social gatherings to the embarrassment of the rest of his family. But the boy's mind is made up. He lets everyone around him know that he will be a soldier defending the nation's borders one day.

The next bit in the Vikram Batra story unfolds in a Chandigarh college, where he, now a strapping lad, falls in love with a classmate, Dimple Cheema (Kiara Advani). As the campus romance blossoms, his parents, his two elder sisters and his identical twin brother Vishal (also played by Sidharth Malhotra) are pushed to the wings.

Dimple Cheema is a Sardarni. Her father is dead against his daughter having anything to do with a Punjabi Khatri boy. But remember, nobody can take away what Vikram Batra sets his sights on. The love affair, however, hits a roadblock when Vikram is caught in two minds over the future course of his life.

With Dimple on his mind, he is no longer sure whether he should pursue his childhood dream of joining the army or settle for a high-salaried Merchant Navy job. In the end, no prizes for guessing, he makes the right decision egged on a bit by his beloved and by his best pal Sunny (Sahil Vaid).

Eighty minutes of the film - the runtime of Shershaah is 135 minutes - are expended on setting the stage for Vikram's heroic deeds, initially in Sopore, the location of his first posting where he develops great camaraderie with his seniors and juniors alike, and then in the course of the Kargil conflict that forces him to shorten a trip back to Chandigarh to meet Dimple and reassure her that his love is for keeps.

Riding on the battle scenes that follow, Shershaah picks up some momentum as all the players before and behind the camera, including the director of photography (Kamaljeet Negi), the action choreographer and the lead actor, come into their own. The deliberate pace of the film's first two quarters is quickly out of the way and Shershaah strikes something akin to a rhythm.

"Live by chance, love by choice and kill by profession" is Vikram's motto as a soldier. Even as the loss of his mates in the course of the war upsets him, he does not stop. In fact, he vows that he will do everything in his power to prevent casualties on the Indian side.

"No one will die on my watch again," the brave 13 Jammu and Kashmir Rifles lieutenant tells Captain Sanjeev "Jimmy" Jamwal (Shiv Pandit), six months his senior in the Indian Army. "If there is any casualty other than the enemy, it'll be me," Vikram says.

The young officer's boss, Lt. Col Y.K. Joshi (Shitaf Figar), is quick to see the spark in both Vicky and Jimmy and has no hesitation in acknowledging that the two are his best men. Unfortunately, Jimmy's character, as well as several others, are grossly underwritten. The actors playing these secondary roles - Shiv Pandit, Nikitin Dheer, Anil Charanjeett - have only stray scenes to make their presence count. It is a losing battle.

Mercifully, Shershaah does not resort to chest-thumping and flag-waving. It celebrates an intrepid soldier. The hero isn't, however, given to either superficial swagger or bellicose bravado. He is the sort of clear-headed guy who knows what he has got to do and chips away at it with unwavering intent.

That, to a certain extent, is how the film is. Just a little more cinematic firepower and flint might have taken Shershaah much higher - and further - as a war drama.