Nothing To See Here, Just Shehnaaz Gill Chilling Under A Waterfall 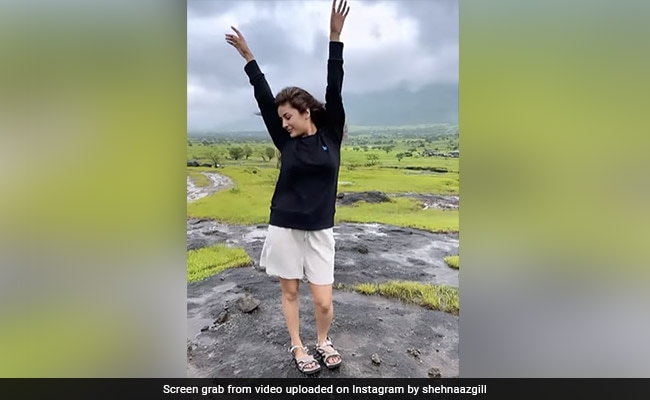 Listen up, folks. Shehnaaz Gill is back with another fun social media post. This time, she has shared a video of her spending some quality time in the lap of nature. In the clip shared on Instagram, Shehnaaz Gill is sitting underneath a waterfall in a meditation pose. She is even standing atop a hill enjoying the breeze, dancing and jumping about in joy, while dressed in a oversized T-shirt and shorts. The Bigg Boss star is accompanied by her brother Shehbaz Badesha. In another portion of the video, she is standing under the waterfall with Shehbaz.

In the caption, Shehnaaz Gill said, “Look deep into nature. then you will understand life better,” with a heart emoji.  Fashion designer-stylist and Shehnaaz Gill's friend Ken Ferns commented: “Like the wind has a rhythm of its own. So do you. Rustling with nature is the best thing ever. Those nature touches. Uff unexplainable, simply divine.”

A few days ago, Shehnaaz Gill shared a video of her dancing on the beach with her brother Shehbaz Badesha. The two are grooving to Shehbaz's recently released song Aunda Janda. Shehbaz wrote the track in addition to singing it. In the caption, Shehnaaz kept it simple with just three hashtags – Aunda Janda, Badesha Shehbaz, Shehnaaz Gill.

On another occasion, Shehnaaz Gill shared a bunch of images of her playing in the mud. In the caption, she wrote, “Spa time,” with the hashtag “off-roading”

Shehnaaz Gill will be making her Bollywood debut with Salman Khan's Kabhi Eid Kabhi Diwali. She was last seen in the Punjabi film Honsla Rakh alongside Diljit Dosanjh and Sonam Bajwa.