"Shaken Up And In Shock": Neha Dhupia Posts Pic Of Raj Kaushal With Friends 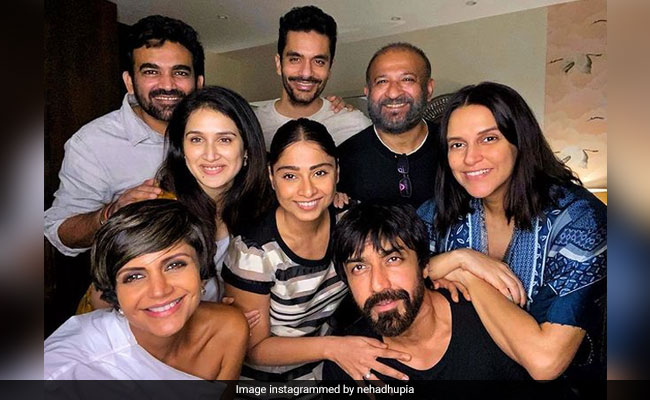 Mandira Bedi's husband and producer Raj Kaushal died at the age of 49 on Wednesday morning in Mumbai. His friend and actress Neha Dhupia, who is "in shock and disbelief," mourned him on social media by sharing a photo of their recent get-together and accompanying it with a heartbreaking eulogy. The photo, clicked earlier this week, features Mandira Bedi, Raj Kaushal, Neha Dhupia, her husband and actor Angad Bedi, actor Ashish Chaudhary, his wife Samita, cricketer Zaheer Khan and his wife Sagarika Ghatge happily posing for the camera. "Raj, we took this picture to create more and more memories... can't believe you are not with us anymore," wrote Neha Dhupia in her tribute.

She added: "Mandira, my strong, strong girl, I am at a loss of words. My heart belongs to Vir and Tara... I'm shaken up and in shock and disbelief as I write this, RIP Raj." Mandira Bedi and Raj Kaushal welcomed Vir on June 17, 2011. The couple adopted Tara, who is just four years old, in July last year.

Here's how Neha Dhupia paid a tribute to Raj Kaushal:

Raj Kaushal's funeral was held on Wednesday morning and among the celebs who attended it were Ashish Chaudhary, Ronit Roy and Samir Soni.

He was also the producer of the 2005 film My Brother...Nikhil. The film, directed by Onir, starred Juhi Chawla and Sanjay Suri.

The details of Raj Kaushal's death are awaited.

"These Words Will Stay With Me Forever": Akshay Kumar Responds To PM Modi's Condolence Message After Mom's Death