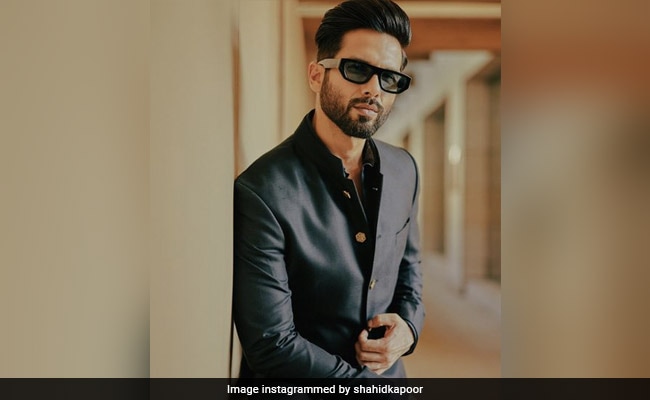 If we are talking about our favourite Bollywood heartthrobs, Shahid Kapoor definitely makes it to the top of our list. The Jersey actor has won our hearts several times. Of course, his acting skills have made us go crazy. But that's not all. Shahid leaves us mesmerised simply by his dashing looks. There are no two ways about it. Leaving us stunned once again, Shahid has dropped some amazing photos of himself on Instagram. In the photos, some of which are also in black and white, Shahid is dressed in a stellar black suit with black sunglasses. Oh boy, we are surely falling in love with his looks once again. The caption was inspired by the song Suit Suit by Guru Randhawa. He wrote, "Mainu Suit Suit Karda?" The actor's photos have left his fans in a daze, no doubt. But Bollywood too has reacted to the post. Jersey co-actor Mrunal Thakur replied in affirmative to his question and wrote, "Of course."

Talking about Shahid Kapoor's good looks, we can't miss telling you about his first look from his upcoming web series Farzi. This will be his OTT debut alongside Vijay Sethupathi and Raashii Khanna. We are already restless with excitement. Amazon Prime Video released the first look of Shahid with the caption, "Farzi On Prime: A small-time artist working out of his grandfather's printing press has designed the ultimate con job - a crime uniquely suited to him - and gets pulled into the murky, high stakes world of all that it demands. A fiery, unorthodox task force officer has made it his mission to rid the country of the menace this poses in this fast-paced, edgy one-of-a-kind thriller."

A post shared by amazon prime video IN (@primevideoin)

We can't take our eyes off Shahid Kapoor this season. Shahid is currently basking in the praise for his performance in Jersey, starring alongside Mrunal Thakur and Pankaj Kapur. And, Shahid's efforts haven't gone unnoticed by his wife Mira Kapoor. She left an adorable note on Instagram Stories that read, "You are magic, Shahid Kapoor. It's been a long journey till the end of this “Test”, every innings brought a new twist. But you knocked it out of the park.”

In Jersey, Shahid Kapoor is seen playing the role of a middle-aged cricketer who tries to make a return to the game for the sake of his son.