Leave it to them to set couple goals with every post 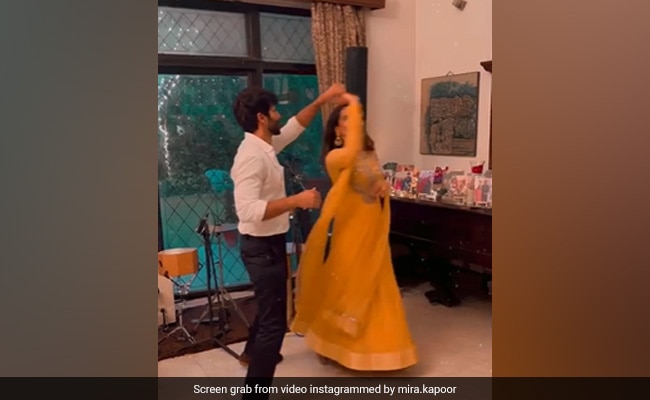 Shahid and Mira in a still from the video. (courtesy: mira.kapoor)

One dance video of Shahid Kapoor is not enough, so Mira Rajput shared another one on her Instagram profile on Wednesday. The video features the celeb couple dancing their hearts out to Bruno Mars' track Marry You. Their smiles say it all. Shahid looks charming as ever in a crisp white shirt and black pants, while Mira is a ray of sunshine in a bright yellow anarkali in the video. What's not to love? Mira Rajput captioned the post: "I think I wanna marry you" along with a heart emoji. Shahid too posted a video this evening, in which he could be seen dancing with brother Ishaan Khatter. He captioned it: "We got it from our mama Neliima Azeem."

Check out the post shared by Mira Rajput here:

Here is the video posted by Shahid Kapoor:

Shahid married Mira Rajput in July in 2015. Their daughter Misha was born a year later in August. Shahid and Mira are also parents to a son named Zain, who they welcomed in the year 2018. The couple celebrated their 7th wedding anniversary in Europe. "The love of my life. Happy 7 baby. I love you beyond the itch and back," Mira captioned her post.

Shahid Kapoor shared a cheeky post on his anniversary, the caption on which read: "7 down baby. Happy anni you made it through 7 hard long years. You a survivor. You a legend."

Shahid Kapoor is best-known for his performances in films such as Udta Punjab, Haider, Jab We Met, "Padmaavat" and Ishq Vishk and the 2019 hit Kabir Singh, co-starring Kiara Advani, to name a few.