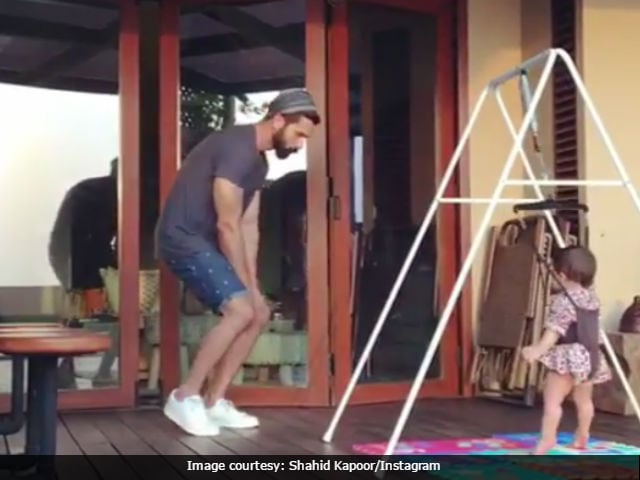 New Delhi: On World Dance Day, actor Shahid Kapoor treated fans to a special video of his daughter Misha dancing (of sort) with him. Shahid Kapoor instagrammed a Shaandaar video in which he is dancing with Misha (who is jumping, strapped to a swing) while an upbeat Michael Jackson song plays in the backdrop. He captioned it: "#worlddanceday #havefeetwilldance #mj dance is in your blood. (sic) The video is totally adorable and nothing less than a treat on World Dance Day. Shahid Kapoor is married to Delhi-based Mira Rajput and together they have a daughter, Misha, who will be one-year-old in August. Watch Shahid and Misha's dance:

Recently, Shahid Kapoor shared a picture showing how he and Misha beat the heat - with a swim.

Shahid Kapoor married Mira Rajput in July 2015 and Misha was born in August 2016. The couple guarded their daughter from social media for the longest time, before Shahid shared Misha's debut Instagram picture cuddled in Mira's arms.

Before debuting in Bollywood with Ishq Vishk, Shahid Kapoor was a part pf ace choreographer Shiamak Davar's dance institute. He featured as an extra in Dil To Pagal Hai and Taal. After Ishq Vishk, Shahid starred in commercial duds like Dil Maange More and Kismat Konnection, and critically acclaimed films like Jab We Met, Kaminey and Haider.

Promoted
Listen to the latest songs, only on JioSaavn.com
In 2016 he was seen in critically acclaimed film Udta Punjab and earlier this year he appeared in Vishal Bhardwaj's Rangoon, which was a box office turkey.