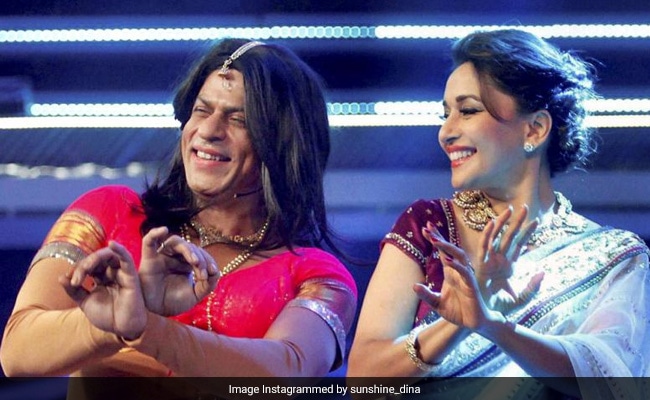 Trolls brave enough to mess with Shah Rukh Khan do so at their own peril – one such discovered this the hard way on Twitter. On Tuesday, the Pathaan star interrupted his Q&A session with fans to give a would-be smarty pants the sharp end of the famous SRK wit. The troll in question had left a disparaging reply and picture in the comments thread of the promotional video featuring Deepika Padukone that Pathaan producers Yash Raj Films had tweeted a day ago. The picture is a screengrab of Shah Rukh Khan in drag – dating from the Filmfare Awards in 2012 – and the snarky comment reads: "Femme fatale" followed by laughing emojis.

No doubt the troll intended it as a double blow to Shah Rukh Khan and Deepika Padukone – only, he reckoned without SRK's comeback burn. Deliberately mistaking the photo as a swipe at Deepika, Shah Rukh Khan set the record straight for the troll with a faux sincere apology.

"Arre no, this is me dressed as a lady. I know I am attractive in all avatars, but you will have to find yourself a better muse my friend. Apologies for misleading you." Shah Rukh Khan - 1, troll - 0.

Arre no no this is me dressed as a lady. I know I am attractive in all avatars, but u will have to find yourself a better muse my friend!! Apologies for misleading you. https://t.co/XBK4PLFcBy

If Shah Rukh Khan sounds jubilant, he has every reason to be. Pathaan, his first leading role in four years since Zero, opens tomorrow to already packed houses. Advance bookings for the film have sold about 4 lakh tickets for the first day already – on the Bollywood charts, only Baahubali: The Conclusion and KGF: Chapter 2 have sold more first day tickets.

Pathaan, directed by Siddharth Anand, stars Shah Rukh Khan and Deepika Padukone as covert ops agents who team up to tackle a terror threat from Jim, played by John Abraham.