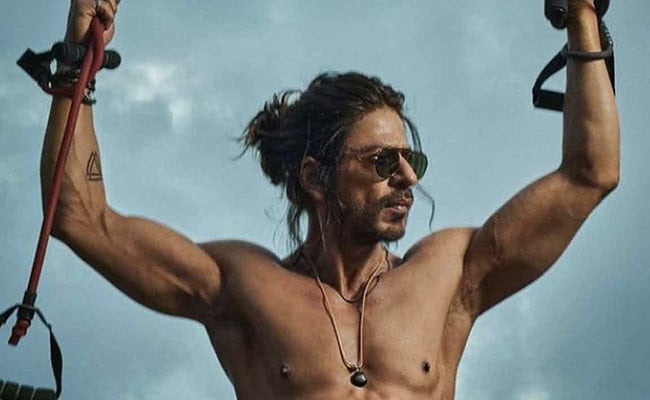 Shah Rukh Khan's ab-tastic look in Pathaan was invoked on an 'Ask SRK' session the superstar conducted on Twitter today. Shah Rukh Khan, 57, is in the best shape of his life currently and shows off an eight-pack in the new action-thriller, releasing tomorrow. In the Twitter Q&A, a fan posted pictures of SRK from Pathaan and wrote, "Samba! Kitne abs the (Samba, how many abs were there)?" The reference, for those who didn't get it (and we're judging you if you didn't) is Gabbar Singh's line from Sholay asking his hapless henchman "Kitne aadmi the (how many men were there?" Shah Rukh Khan answered in the witty but humble manner that has to come to be his defining characteristic. "Abs bahut hai sardar, kuch good qualities dhoond raha hoon ab (abs are many, now looking for some good qualities)." 'Sardar' is the appellate given ti Gabbar Singh by his gang.

Several fans shared pictures of Pathaan-related excitement and initiatives – like a blood donation camp. See their tweets to Shah Rukh Khan and his responses here:

Shah Rukh Khan finally signed off his 'Ask SRK' session because it was lunch time. "Now need to go and have lunch with family. Once again, thank you and see you at the movies. Hall ki kursi pe peti mat baandhna (no need for seatbelts in the theatre seats), just enjoy karna… it's safe and exciting! Love you all, Pathaan," he tweeted.

Now need to go and have lunch with family. Once again thank u and see u at the movies. Hall ki kursi par peti mat baandhna….just enjoy karna…it's safe and exciting!! Love u all. #Pathaan

Pathaan stars Shah Rukh Khan in the title role, a agent brought in from the wilderness to tackle a terror threat. He teams up with Deepika Padukone's character against terrorist leader Jim, played by John Abraham.

Pathaan, directed by Siddharth Anand, opens tomorrow and has fetched record advance booking numbers for its first day. With about 4 lakh tickets sold so far (just behind Baahubali: The Conclusion and KGF: Chapter 2), Pathaan is set for a blockbuster opening.