"I was talking to him backstage and he is one of the most humble people I have ever met," said Jeff Bezos 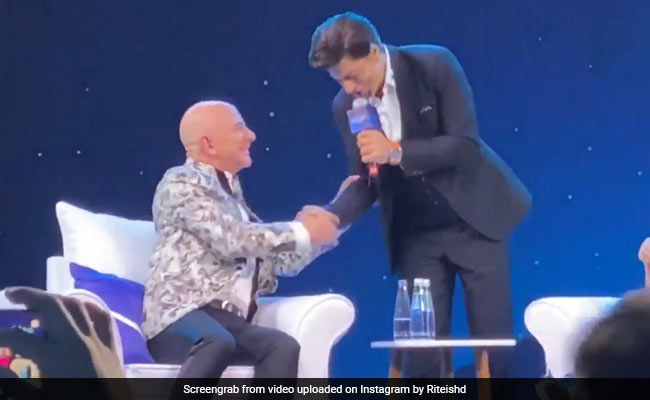 Shah Rukh Khan, who has quite a bit of a reputation for cracking people up with his wit, did just that with Amazon CEO Jeff Bezos, who was in India recently. The 54-year-old actor, who interacted with Mr Bezos during a special event hosted by Amazon on Thursday night, cracked him up with his humour. On Friday, Jeff Bezos shared a snippet from last night's session on his Instagram profile and he wrote: "Lots of fun on stage with Shah Rukh Khan and Zoya Akhtar." In the video, Mr Bezos can be heard saying, "I was talking to him backstage and he is one of the most humble people I have ever met," to which SRK responded by saying, "That's because my last few films haven't done well." SRK's chuckle-worthy response made Jeff Bezos almost choke on the glass of water that he was sipping.

Lots of fun on stage with @iamsrk and @zoieakhtar.

On Thursday night, Bollywood actor Riteish Deshmukh, who attended the event with his wife Genelia D'souza, shared a video from the event, wherein SRK modified a dialogue from his film Don and made Jeff Bezos say, "Don ko pakadna mushkil hi nahi impossible hai." We also got a glimpse of filmmaker Zoya Akhtar laughing in the backdrop.

On the professional front, Shah Rukh Khan has reportedly been signed for the Hindi remake of Quentin Tarantino's Kill Bill. However, he has not announced his association with the project. The actor produced Netflix's Bard Of Blood, and Amitabh Bachchan and Taapsee Pannu's Badla in 2019. Aanand L Rai's Zero, co-starring Anushka Sharma and Katrina Kaif, remains SRK's last release.