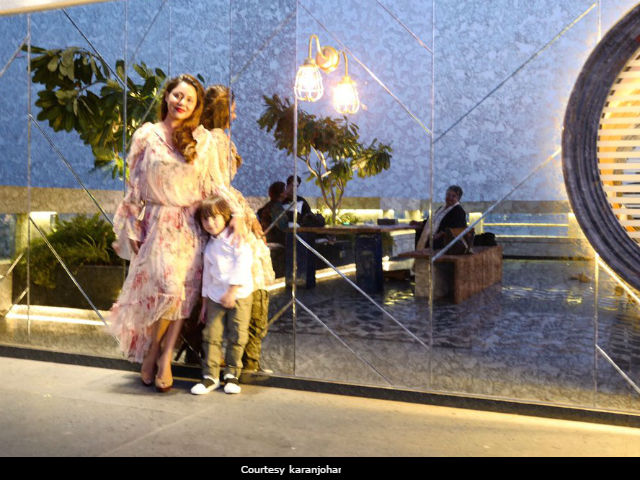 New Delhi: AbRam Khan, superstar Shah Rukh Khan's youngest one, is already a star in the making. Needless to say, AbRam's popularity and his signature trait of effortlessly being adorable continue to make him feature in headlines and a social media favourite. AbRam often features on the social media accounts of his mother, celebrity designer Gauri Khan, Shah Rukh (of course) and their good friend, filmmaker Karan Johar. On Monday, a visit to Karan's Twitter page is the perfect remedy for your Monday blues as he posted a picture of Gauri and AbRam, in which the almost-four-year-old little guy looks super-cute in a white shirt and cargo pants. "The adorable AbRam is turning out to quite the poser! Stealing the thunder from his talented and beautiful mother," wrote Karan.

Gauri and AbRam can be seen posing against a glass wall believed to be at Karan's residence, which offers a view of the sprawling terrace, recently designed and put together by Gauri.

The adorable Abram is turning out to quite the poser!!!! Stealing the thunder from his talented and beautiful mother... pic.twitter.com/Nt6bvB7QPE

Gauri and AbRam appear to be the star guests at the inauguration party of Karan Johar's newly done terrace with a view, of which Gauri shared several pictures. "An opportunity to design this sprawling terrace. What an amazing view," she wrote on Instagram.

When the client is the inspiration, the result is gorgeous... thank you, @karanjohar. pic.twitter.com/ITEX4Z223t

When the client is the inspiration, the result is gorgeous...thank you @karanjohar

An opportunity to design this sprawling terrace @karanjohar . What an amazing view.

Promoted
Listen to the latest songs, only on JioSaavn.com
Karan Johar is believed to have bought his sea-facing apartment in Carter Road, Bandra, sometime in 2010 and owns the top two floors of the building. Last year, Gauri also helped Ranbir Kapoor decorate his new apartment in Pali Hills. Gauri was thanked by Ranbir's parents - Rishi Kapoor and Neetu - for her work on the house.

Meanwhile, AbRam was recently spotted sporting a temporary tattoo similar to the one which Shah Rukh has at an IPL match in Rajkot. AbRam was photographed in the stands with Shah Rukh, whose Kolkata Knight Riders won the match.