"When are you designing my office?" asked Shah Rukh Khan 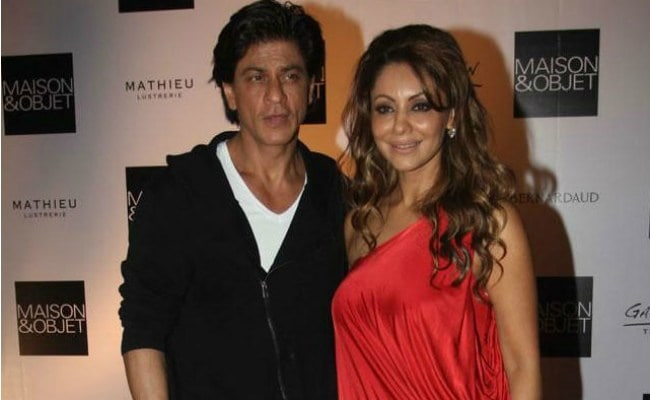 Brace yourself for just another typically Shah Rukh Khan style Instagram exchange between the Bollywood megastar and his interior designer wife Gauri Khan. Gauri recently designed a studio for a cosmetic brand and shared a glimpse of the setting on Instagram. Shah Rukh, who contributed to the over-27,000 likes on Instagram, also posed a query to his wife. "When are you designing my office?" he asked and Gauri typed out a tongue-in-cheek response. "As soon as I have some free time..." she posted with a smiley. Gauri often feature on witty posts on Shah Rukh's social media and this one is slightly different as the one appears to be trolled here is Shah Rukh himself.

Designed this space for Bollyglow ! A new disruptive beauty brand inspired by film and aimed at everyday women, bringing out the star in them. Dare to be different with the innovative, easy to use products made in Italy & Korea, and affordably priced. @bollyglow #GauriKhanDesigns @imanallana

Check out their conversation here:

Gauri Khan, who owns her very own interior designer label Gauri Khan Designs, has designed Ranbir Kapoor's new apartment and redecorated Karan Johar's roof top other than several other celeb homes including that of Jacqueline Fernandez's. She has also designed a restaurant in Khar - Arth.

Earlier in August, Shah Rukh couldn't resist commenting on a magazine cover featuring Gauri. By Gauri was described as "our latest cover girl" for the September issue of Femina, Shah Rukh gave a shout out to his wife with these words: "For us she is the Cover Mother." That's so sweet of you Shah Rukh. Gauri and Shah Rukh are parents to Aryan, 20, Suhana, 18 and AbRam, 5.

Sometime in July, he also appeared flattered by a photo of Gauri and Suhana, which was originally titled by the star wife as "New York Times." Shah Rukh, who spotted the photo after returning to Mumbai to resume his work commitments while the mother-daughter prolonged their vacation, wrote: "NYTimes is carrying great news."

Shah Rukh Khan is also simply the best with captions. Check out this one:

After years the wife has allowed me to post a pic I have taken...she's all heart!

Gauri Khan celebrated her 48th birthday this month. On the work front, Shah Rukh will soon be seen in December release Zero, in which he co-stars Katrina Kaif and Anushka Sharma.