Shah Rukh, Salman Khan and Akshay Kumar are now Forbes regulars. Amitabh Bachchan, who made it to the list year, has dropped off this one 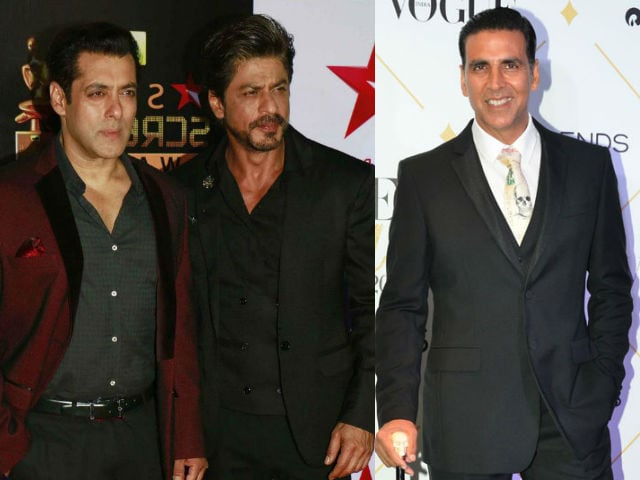 New Delhi: Forbes has released its list of the world's 20 highest paid actors of 2017, just days after the corresponding list of actresses. "A quarter of this year's list hail from outside the US, including three stars from Bollywood," as Forbes puts it - these three actors comprise two Khans and Akshay Kumar. Aamir Khan, whose 2016 release Dangal currently has the distinction of being India's top grossing film, is not on the list. The Khans who made it are Shah Rukh and Salman. SRK, Salman and Akshay are now Forbes regulars and have been ranked among the top 20 actors for the 3rd year. The stars are placed at the last three spots on 2017's list. Amitabh Bachchan, who scraped into the list last year, has dropped off this one.

The highest ranked Indian actor is Shah Rukh Khan at #8, the same position he occupied last year. His stated earnings have risen from $33 million in 2016 to $38 million in 2017. Forbes summed up SRK's annual earnings from films and endorsements deals "of brands most Americans have likely never heard of" - this year, Shah Rukh Khan starred in Raees and Jab Harry Met Sejal, the last of which was a spectacular flop.

At ninth place is Salman Khan, several notched up from his 2016 ranking of #14. Salman, whose film Tubelight also tanked, took home $37 million - significantly more than the $28.5 million he made last year. "Khan still earns top rupee," says Forbes about the 51-year-old actor who counts hosting reality show Bigg Boss among his many high-paying gigs.

Akshay Kumar completes the top 10, a repeat of last year's list, with $35.5 million. He made $31.5 million last year. Akshay, referred to as "king of Bollywood box office for over a quarter of century" by Forbes, earned his millions from four films released in the scoring period which is June to June. His latest film, Toilet: Ek Prem Katha, opened two weeks ago and has made over Rs 100 crore.

Adam Sandler and Jackie Chan round up the top five and the spots above Shah Rukh Khan are filled by Robert Downey Jr and Tom Cruise.

Promoted
Listen to the latest songs, only on JioSaavn.com
Below the top 10 are several actors who play superheros - Chris Hemsworth, Chris Evans, Ryan Reynolds, Chris Pratt and Mark Ruffalo. Jeremy Renner makes it as well, although not for playing Hawkeye in the Avengers series. Ryan Gosling and Samuel L Jackson also make it.

The absence of Aamir Khan from the list is easily explained - he only makes one film in a year or two years and is similarly choosy about endorsements. Like Deepika Padukone, who dropped out of this year's list of highest paid actresses after being ranked #10 last time, superstar Amitabh Bachchan has had a slower year than previously. Aamir and Mr Bachchan are currently filming Thugs Of Hindostan together.
Comments
forbes highest paid actorsshah rukh salmanakshay kumar