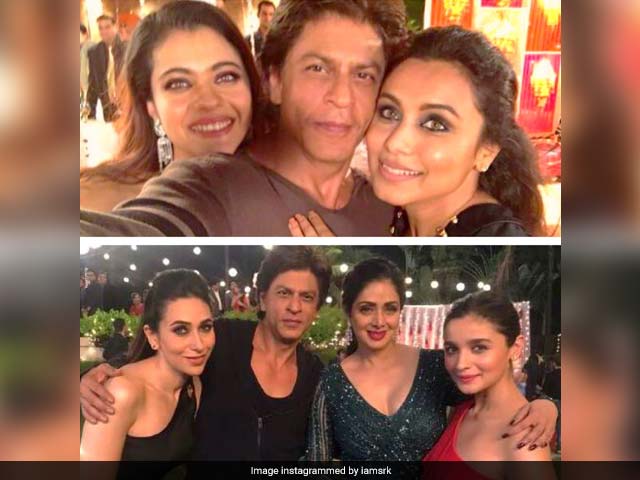 New Delhi: Monday blues? Nah, superstar Shah Rukh Khan made our Monday morning bright, very bright. SRK posted a lovely picture collage with actresses Sridevi, Kajol, Rani Mukerji, Alia Bhatt and Karisma Kapoor and our day was made. In the first picture, SRK poses with Kajol and Rani Mukerji (his Kuch Kuch Hota Hai and Kabhi Khushi Kabhie Gham co-stars) and in the second one, he shares the frame with Sridevi, Alia Bhatt and Karisma Kapoor. (Wow). "Some nights the stars with you shine brighter than the ones in the sky. Thank you ladies for your graciousness beauty & love," the 51-year-old captioned his post. (We would like to thank Shah Rukh Khan for this amazing picture).

Sum nites the stars with u shine brighter than the ones in the sky. Thx ladies for ur graciousness beauty & love.

Like us, Internet too is smitten to see to see SRK with these actresses. "Looking so beautiful ladies and SRK so handsome," "Such a beautiful picture," are some of the comments on the post, shared just an hour ago.

Meanwhile, SRK fans are delighted to see him, Kajol and Rani in one picture. "Oh, how sweet. Anjali-Rahul-Tina in one frame again," wrote a user. Kuch Kuch Hota Hai, directed by Karan Johar, was a massive hit.

Promoted
Listen to the latest songs, only on JioSaavn.com
Shah Rukh Khan has co-starred with Sridevi in Army while he shared screen space with Karisma Kapoor in Dil To Pagal Hai and Shakti: The Power. Dear Zindagi, starring SRK and Alia Bhatt, released last year.