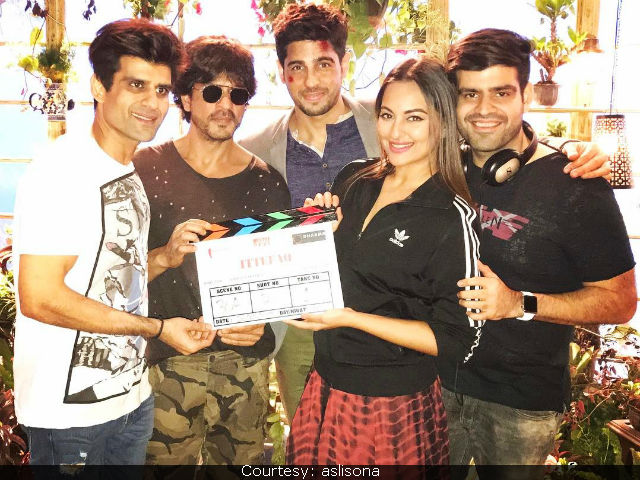 New Delhi: Actors Sonakshi Sinha and Sidharth Malhotra's upcoming film Ittefaq went on floors on Monday. Sidharth confirmed the news on Instagram and shared a picture of the film's clapboard and wrote, "It begins #ittefaq." Ittefaq is the remake of 1969 film of the same name, featuring late actor Rajesh Khanna and Nanda. Mr Chopra had even won Filmfare Award for Best Director for the film. The film was helmed by late director Yash Chopra. Superstar Shah Rukh Khan visited Sonakshi and Sidharth on the sets and gave the first clap for the film. He wrote, "My fav film by Yashji #Ittefaq is being recreated by Abhay." This is for the first time that Sonakshi, 29, and Sidharth, 32, would be sharing screen space.

Check out SRK and Sidharth's posts on Ittefaq:

My fav film by Yashji #Ittefaq is being recreated by Abhay. Thanks @s1dofficial , @aslisona , Akshaye. Also BR & @dharmamovies tie up with @redchilliesent. Ittefaq starts now. Thanx to Juno and his wonderful team.

They met last night and it was no #ittefaq @aslisona @s1dofficial

Promoted
Listen to the latest songs, only on JioSaavn.com
In the pictures, Sidharth can be seen with bruises on his face for his role while Sonakshi seen casually dressed. "It was great to have Shah Rukh sir visit us on the sets. He gave us tips and creative suggestions on our roles. I am really excited to create this film with Dharma and Red Chillies," news agency IANS quoted the Kapoor And Sons actor as saying.