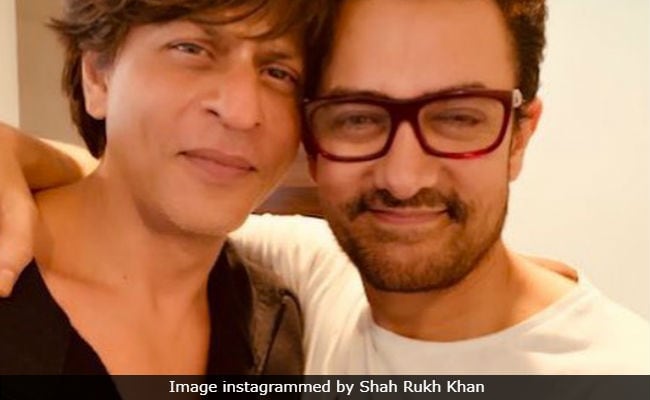 Actor Shah Rukh Khan posted a picture from his late night rendezvous with 'Thug' Aamir Khan, who watched and later reviewed the trailer of SRK's upcoming film Zero. "Hug from the Thug....!! Beat that!," Shah Rukh captioned the picture, which shows Aamir giving Shah Rukh an one armed hug with big smiles on their faces. By 'Thug,' Shah Rukh was alluding to Aamir Khan's Thugs Of Hindostan, which releases next week. On Thursday morning, Aamir posted his review of the trailer on Twitter: "I just saw the trailer of Zero. Just one word... outstanding!!! Congratulations Aanand L Rai! #Katrina is fantastic! Anushka Sharma is unbelievable! Shah Rukh, you have outdone yourself! Can't wait to watch the film!"

We don't have to wait too long to watch the trailer of Zero, as it will release on the Internet tomorrow on Shah Rukh Khan's birthday. Before the trailer, Shah Rukh shared two posters from the film. In one, SRK (who plays the role of a dwarf) can be approaching Katrina Kaif who towers over him. In the other poster, SRK and Anushka (on a wheelchair) can be seen sharing a light moment.

The film's posters have made us really curious. Aren't you?