Shah Rukh Khan And Gauri Just Like This, Forever

In the picture, Shah Rukh Khan and Gauri look at each other and smile 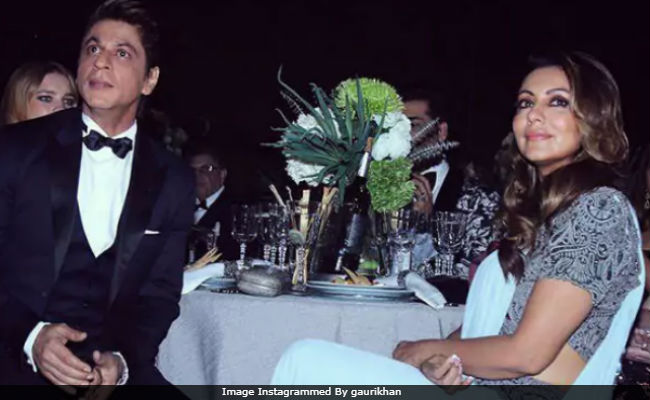 New Delhi: Gauri Khan, wife of superstar Shah Rukh Khan, shared an old picture of the duo, which appears to be from a photoshoot. In the picture, SRK and Gauri look at each other and share a smile. He is seen wearing a black shirt while she appears to be styled in a white crochet dress. Gauri doesn't need any caption for the picture. She just posted it with a heart emoticon and tagged designer duo Abu Jani and Sandeep Khosla. "Such a lovely picture. Always be happy together" and "Wow, what a beautiful romantic picture," are some of the several comments posted on SRK and Gauri's adorable picture.

Take a look at it here.

Shah Rukh Khan and Gauri married in October 1991. Aryan, 19, Suhana, 16 and AbRam, 5, are the couple's three children. The 52-year-old superstar debuted in Bollywood with Deewana in 1992. He has completed over 25 years in the industry. SRK's films like Dilwale Dulhania Le Jayenge, Veer Zara and Kal Ho Naa Ho have been incredibly successful at the box office. Shah Rukh Khan turned 52 last November. A grand birthday party was held at his Alibaug farmhouse.

Designing for Ace Group India who have always been creative, innovative & imaginative in the front of the real estate developments in Delhi .

Shah Rukh Khan is now filming Aanand L Rai's Zero, co-starring Anushka Sharma and Katrina Kaif. Raees and Jab Harry Met Sejal, are his two films which released in 2017. Zero, in which he plays a dwarf, released this December.