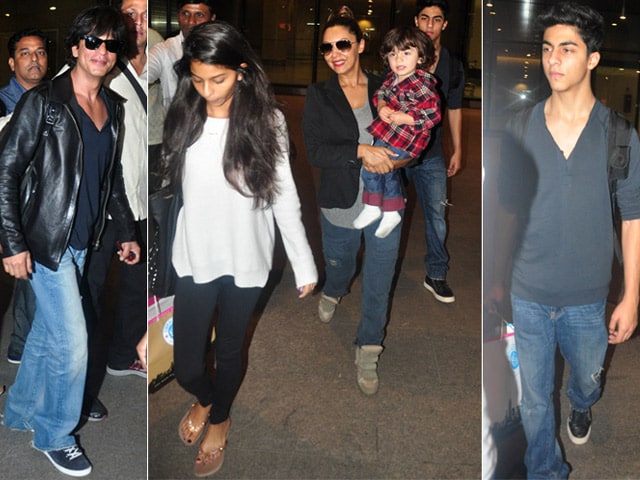 The actor, who owns a bungalow in the Emirate's coveted area, Palm Jumeirah, was spotted at the Mumbai airport with his family.

Promoted
Listen to the latest songs, only on JioSaavn.com
SRK was all smiles as he returned home, dressed in denims and tee with glares and ruffled-up hair.

SRK's toddler was first spotted strolling with his nanny and later Gauri picked him up as the family walked out of the airport. The family seems relaxed about the paparazzi around their youngest child post a few outings. Little AbRam looked adorable in denims and checked shirt, while his mother looked chic in cargo pants worn with a grey tee and black blazer.

Like mother like daughter, Suhana looked stylish in black crop pants and loose t-shirt. Aryan, who joined his family directly in Dubai from London, where he is currently studying, was his usual broody self.

The family, who had reached Dubai soon after Christmas enjoyed quality family time there, as was revealed by Shah Rukh's post on microblogging site Twitter.

48 hrs of uninterrupted unadulterated unconditional love with my Trimurti. No place I'd rather be than holding u three. Aryan Suhana AbRam

Shah Rukh, who was shooting for Yash Raj Film's Fan before leaving, is likely to resume the shooting for the film directed by Maneesh Sharma. The actor will also soon start shooting for Raes co-starring Farhan Akhtar and Pakistani belle Mahira Khan.