"When they got to know I was going through financial woes, both Sumeet and Sushant, who call me 'Shagufta aapa', came forward and helped me," said Shagufta Ali 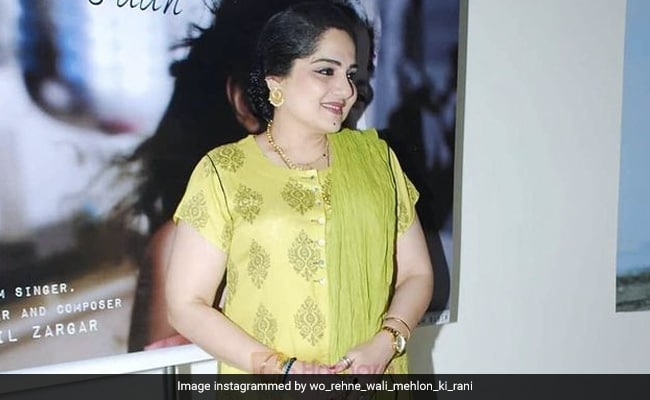 Unlike the rest of the world, popular actor Shagufta Ali says she has been under "lockdown" for the last four years, battling depleting finances due to poor health and struggling to find work in an industry to which she has dedicated over three decades of her life.

Best known for her work on TV shows like Saans, Sasural Simar Ka and Saath Nibhaana Saathiya, Ali was diagnosed with diabetes six years ago, around the same time when the roles started drying up.

The 54-year-old actor said she has been out of work since 2018. Her last acting role was a cameo in the show Bepannaah.

She initially tried to manage the situation on her own by selling off her car and jewellery to pay mounting medical expenses, but has now reached out to the industry publicly as she was left with no other option.

"It's a long treatment and an expensive one, for which I was facing financial troubles. So I finally opened up to friends in the industry, asking for help because I was unable to carry on without support," Ali told PTI.

"The pandemic has been difficult for everyone but I have been going through a lockdown for the past four years," she added.

The actor said she has received aid from some of her colleagues from the industry, including Sarabhai Vs Sarabhai star Sumeet Raghavan, Savdhaan India host Sushant Singh and Neena Gupta, her co-star and director of Saans.

"When they got to know I was going through financial woes, both Sumeet and Sushant, who call me 'Shagufta aapa', came forward and helped me. Even the Cine And TV Artistes'' Association (CINTAA) reached out to me. They will be doing whatever best they can."

However, the coronavirus induced nation-wide lockdown last year made matters worse for Ali. The constant worry of survival took a toll on her health, with the high blood sugar levels harming her eyes, for which the actor is currently undergoing treatment.

Ali said the first two years after she was diagnosed with diabetes in 2015 were "relatively manageable" but the deteriorating financial situation pushed her to s corner.

"When the work stopped, my stress levels increased. That shot up my diabetes. I tried to manage things on my own by selling off my car and jewellery as I didn''t ask for help initially. I had no mutual funds or fixed deposits so the money came from there to run the house," the actor, who lives with her mother here, said.

"But then it became difficult to pay for medical bills, especially with the lockdown. I had to reach out because I had no other choice." Ali started her career in the late 1980s with appearances in ''90s films like Hero No 1, Mehndi, and Sirf Tum. She gained recognition with Gupta''s 1998 show Saans, on which she played her sister-in-law Shakutala Suri.

The actor went on to star on shows like the medical drama Sanjivani, Woh Rehne Waali Mehlon Ki and Sasural Simar Ka among others.

Also a cancer survivor, Ali said her career of more than three decades has been plagued by constant health issues. She was diagnosed with stage three breast cancer 20 years ago, while she was shooting for Saans.

"It was an extremely difficult phase. But when one is younger, enthusiastic and energetic, you have an incredibly strong positive attitude. I didn't feel like sharing what I was going through with anyone. I was too busy and happy working. I fought cancer and came back.

"It''s God''s blessing that he kept me going despite the rough patch. I''ve been working in the industry for more than 30 years, given it my all. My work is all that matters to me." Ali hopes her struggle will soon end and she will be healthy enough to go back to work.

"I can't fight my destiny, I am just trying to cope with it. Sometimes life puts you in situations where you have to do things which you never thought you would. I had to go public to support myself, my mother. I am sure God will be kind to me and so will be people," she added.