"Thank you so much. I have no words," said Shagufta Ali 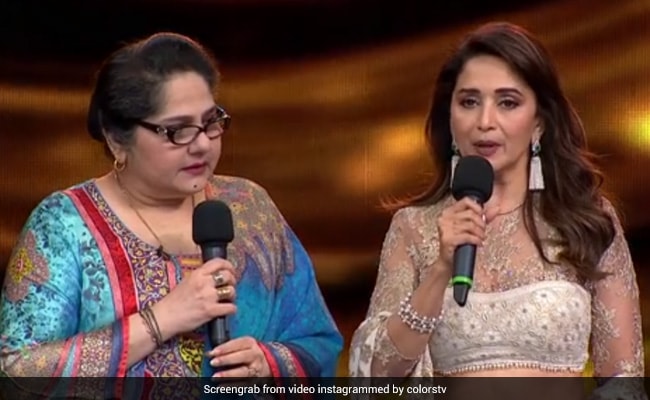 Actress Shagufta Ali, who recently opened up about her struggle to find work in the industry and also her financial condition as a result of lack of work, was invited to the dance reality show Dance Deewane, where Madhuri Dixit features as one of the judges. The veteran actress received financial aid of Rs 5 lakh from actor Madhuri Dixit on behalf of the team of the reality show Dance Deewane 3. While handing the cheque to Shagufta Ali, Madhuri Dixit said, "You had written that you have nothing to even sell right now. You have reached such a stage today, so from the Dance Deewane team, we would like to do something for you. From them, I would like to give you a cheque of Rs 5 lakh." An emotional Shagufta Ali replied, "Thank you so much. I have no words."

Shagufta Ali, who featured on Colors TV's show Sasural Simar Ka, opened up about her struggle and she said during her appearance on Dance Deewane: "The last 32 years among the 36 years have been wonderful. I struggled a lot, worked a great deal too, supported my family and myself. But four years ago, several auditions took place, a lot of things happened but nothing was working out. During that time, the problem with my leg increased because of diabetes, which also affected my eyes. I don't know why but I couldn't tolerate the pain of these four years. The industry is my home, I have given 36 years to it."

The actress, in a recent interview with SpotboyE, said, "I don't know why but from last four years, less work has come to me and whatever came, at the last moment it didn't get materialized." She added,"Not many knew that I am going through a major financial crunch because till then I sold a lot of my assets to survive." Seeking financial help from members of the industry, she said, "I need immediate financial help and also work to survive. I was really confused, honestly if I should come out and ask for help. But I am in need as I have nothing left to sell now."

Shagufta Ali is best known for her works in Saans, Dishayen, Sanjivani, Punar Vivah and Zaara, among others. She was last seen in the 2018 show Bepannaah. Shagufta Ali has also been a part of films like Hero No 1, International Khiladi, Laila Majnuand Ajooba, to name a few.