Seen This Pic Of Mahesh Babu, Namrata Shirodkar And Kids?

Before you log off for the day, we bring to you a new picture of Mahesh Babu, his wife Namrata Shirodkar and children 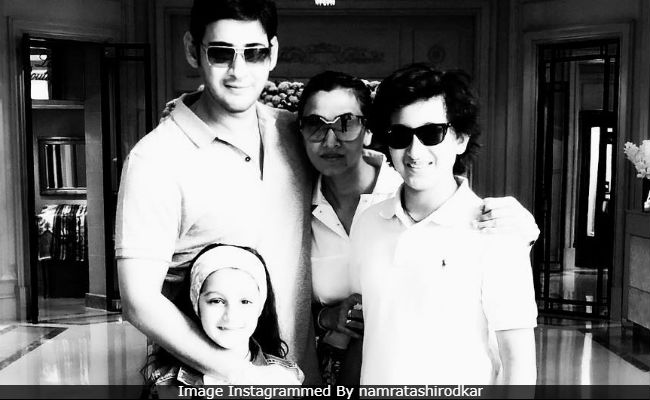 We know it's late, folks. But, before you log off for the day, we bring to you a new picture of Telugu superstar Mahesh Babu, his wife Namrata Shirodkar and children Gautam and Sitara. Namrata just treated her Instafam with an adorable family portrait, which she shared with heart-eyed emoticons. In the black and white picture, the family of four smile for the camera. While Mahesh Babu, Namrata and Gautam appear to be twinning in casual outfits, little Sitara steals the spotlight in her denim look. (How cute!). "What a cute picture" and "wow" are some of the comments on the family's picture.

It also comes as a sweet surprise for all Mahesh Babu fans who are eagerly waiting for his birthday - August 9. Hashtags in the likes of 'Mahesh Babu's birthday' are already trending on and off on Twitter.

Mahesh Babu and family recently went to Paris for a vacation and the pictures shared by Namrata Shirodkar are proof of the fun they had.

Mahesh Babu and Namrata Shirodkar married in 2005. She is a former beauty queen. She won Miss India title in 1993 and made her Bollywood debut film with a cameo in Salman Khan and Twinkle Khanna's Jab Pyaar Kisise Hota Hai (1998). Pukar, Vaastav, Astitva and Bride and Prejudice are some of the films she starred in.

Mahesh Babu was last seen in Bharat Ane Nenu, which was a hit at the box office. Mahesh Babu played the role of a strong-willed and honest chief minister of Andhra Pradesh in the Koratala Siva-directed film.

Promoted
Listen to the latest songs, only on JioSaavn.com
Comments
mahesh babumahesh babu and namrata shirodkar