Seen Sunny Deol's Childhood Pic With His Sister Lali Yet? 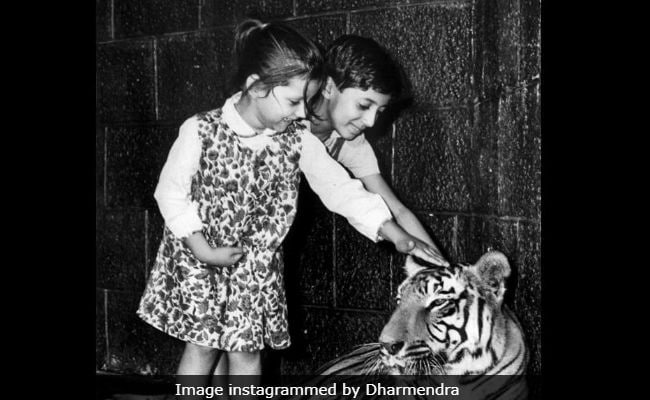 New Delhi: Dharmendra opened the treasure trove of throwback photos yet again and this time he shared a picture of his children Sunny Deol and daughter Lali (apparently a nickname for Ajeita Deol) when they visited him on the sets of his 1968 film Ankhen. In the picture the two siblings can be seen touching a tiger (required for a scene in the film) and looking extremely pleased with themselves. "Courageous kids of courageous father touching the tiger and feeling so good at the set of film Ankhen," Dharmendra captioned the picture, which now has over eight thousand likes.

Courageous kids of courageous father touching the tiger and feeling so good at the set of film"Aankhen"my daughter Lali and my son Sunny!!!

Dharmendra married twice. Sunny, Bobby, Ajeita and Vijeta are his children with his first wife Prakash Kaur while Esha and Ahana are Dharmendra and Hema Malini's daughters. Ajeita and Vijeta are married and settled in the US while Sunny and Bobby Deol are Bollywood actors. Bobby Deol featured in latest film Race 3, co-starring Salman Khan. Esha Deol is an actress and a classical dancer like her mother while Ahana is an Odissi dancer.

Dharmendra has featured in films over 100 films including Chupke Chupke, Sholay, Loafer and Yaadon Ki Baaraat in a career spanning six decades. His upcoming film is Yamla Pagla Deewana Phir Se with his sons Sunny and Bobby Deol. It is the third film in the Yamla Pagla Deewana series and it is expected to release on August 15.