Race 3: Salman Khan And Bobby Deol Get Best Wishes From Dharmendra With These Throwback Pics 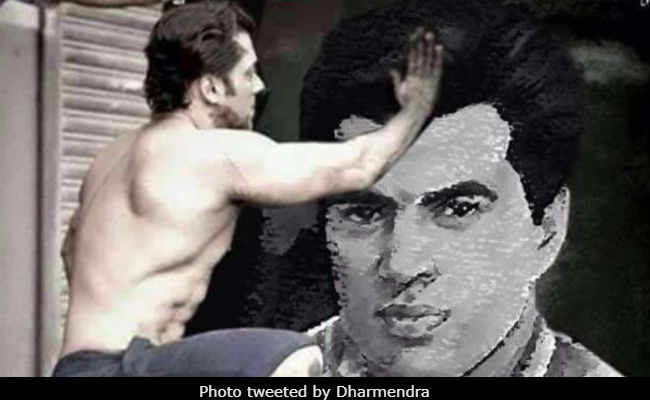 New Delhi: Are you ready for Race 3 at the theatres this Friday? While Salman Khan and team Race 3 are gearing up for the release of the film, Dharmendra dropped heart-warming wishes for the cast with some unique throwback pictures on Twitter. Sharing throwback photos, featuring his son Bobby Deol and Salman Khan, Dharmendra wished them luck for their upcoming venture. The veteran actor shared a photo of himself with a much younger version of Bobby Deol and wrote: "My God bless you with best of the best in life!" In another post addressed to Salman, Dharmendra wished "thundering success" for Race 3. Sharing an old photo of Salman, Dharmendra wrote: "Bless you for your love, may God bless you with thundering success!"

Salman and Dharmendra shared screen-space in films such as Pyar Kiya Toh Darna Kya and Tell Me O Khuda. Take a look at the posts shared by Dharmendra:

My God bless you with BEST OF THE BEST in life!! pic.twitter.com/WtPexRPQob

My God bless you with BEST OF THE BEST in life!! pic.twitter.com/WtPexRPQob

This WARMTH is so much in the air , nazar na lage !! Love you Salman , great luck for RACE3!!! pic.twitter.com/E0Q1zVi0Ou

In promotional interviews for Race 3, Bobby Deol has always credited his co-star Salman Khan for reviving his career. In a recent interview to NDTV, Bobby Deol also opened up about his low phase and shared how Salman helped him overcome it. "I met Salman one year ago, and he told me everyone has low and high phases. He said when he had a bad period he climbed on to my brother's back and Sanjay Dutt's back. That's when I told him, 'let me climb on to your back for support," Bobby Deol said in the interview.

Bobby Deol, who was last seen in Poster Boys in 2017, underwent a massive physical transformation for his role in the latest instalment in the Race franchise. Earlier, the actor had mentioned that it was Salman who had motivated him to work on his physique and shared a picture of his transformed self. Take a look at what he has shared on his Twitter handle:

Promoted
Listen to the latest songs, only on JioSaavn.com
It was also reported that Salman has decided to attach the trailer of Yamla Pagla Deewana Phir Se to his film Race 3. Salman reportedly insisted his producers to add the first promo of Dharmendra, Sunny and Bobby Deol's film to Race 3, when it hits screens on June 15. The 52-year-old actor will also feature in a "special song" in the film, which has already been filmed. If you don't believe us, here's a picture as proof: