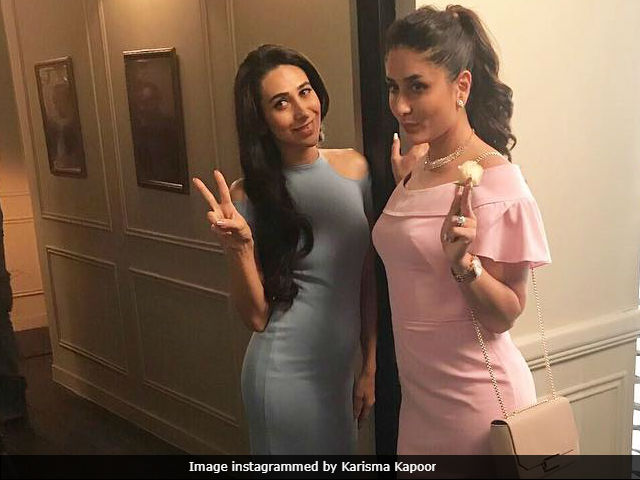 New Delhi: Kareena Kapoor Khan and Karisma Kapoor finally became co-stars - but for a new advertisement for a jewellery brand. No need to be disappointed, the 30-second advert is nicely conceptualized and fabulously executed by the Kapoor sisters. Kareena is in a jewellery shop to buy a birthday present for Karisma. After checking out several articles, she gets one wrapped. The scene shifts to Karisma's place where Kareena enters wearing the same necklace which got packed. She cooked up a story for not bringing her a gift and gives her a rose (which she picked from the showroom) - at least she could have bought her new bouquet. The ad depicts the mean-yet-loveable side of sibling love.

We have our fingers crossed for a film co-starring the Kapoor sister but till then, watch this ad:

As of now, Kareena Kapoor Khan is in New Delhi filming Veere Di Wedding with Sonam Kapoor, Swara Bhaskar and Shikha Talsania. Veere Di Wedding is produced by Sonam's sister Rhea and directed by Shashanka Ghosh, who also made Khoobsurat. The shooting of Veere Di Wedding started earlier this week and the cast and crew have been sharing fabulous pictures from the film's sets.

While Kareena was busy in Delhi, we spotted Karisma Kapoor, looking rather uber-chic, in Goa for a photoshoot. Here are snippets of Karisma's Goa work diary.

Promoted
Listen to the latest songs, only on JioSaavn.com
Kareena Kapoor hasn't announced her next film after Veere Di Wedding and the Udta Punjab actress has also reportedly planned to make only one film per year. The reason is simple and cute - her son Taimur, who was born last year in December.