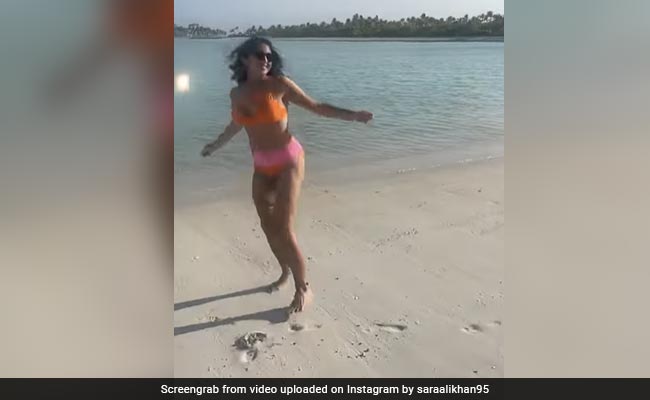 Sara Ali Khan loves the Sun, the sand and the sea. We know this because the actress has shared this aspect of her life with fans through a host of pictures and videos on social media. On Tuesday, Sara Ali Khan seemed to be missing the sea – more specifically, the Maldives – a bit too much, causing her to share a throwback video of her “memories in Maldives”. In the video, the Love Aaj Kal star is riding cycles, swimming and frolicking on the beach with her friends. She is also seen chilling by herself in a hammock, taking in the beauty around her.

As always, Sara Ali Khan shared a caption that was replete with rhymes. Reminding us of her famous Sara ki shayari. She said, “Missing this wind in my hair.  Sunkissed face, messy hair. So here's a glimpse I thought I would share. All-day chilling- not a care. Sunrise, sunset great vibes everywhere.”

It is not just the beaches that Sara Ali Khan is missing. The ardent traveller confessed a few days ago that she was also majorly missing the mountains. The actress had shared a series of pictures in which she is sitting in the lap of a hill meditating, shopping and even enjoying a boat ride with the snow-capped mountains behind her. For the caption, Sara Ali Khan said, “Major mountain missing. Especially the sun kissing.” She added the hashtag “throwback”.

Sara Ali Khan began the year with some travel by visiting the Mahakaleshwar Jyotirlinga temple in Ujjain, Madhya Pradesh. She was accompanied by her mother, actress Amrita Singh. Sharing images of her visit to the shrine, the actress said, “Maa aur Mahakal,” with the hashtags “Jai Mahakal” and “Jai Bholenath”

On the work front, Sara Ali Khan is currently shooting for her next film directed by Laxman Utekar. She will; share the screenspace with Vicky Kaushal in the movie that is being currently filmed in Indore. The actress was last seen in Atrangi Re opposite Dhanush and Akshay Kumar. The film was directed by Aanand L Rai.