Sara Ali Khan Is Back With Her Shayari: "Hopefully My Poem Won't Be Dismissed"

Sara Ali Khan shared a few photos of her twirling in a blue and white dress to go with the poem. 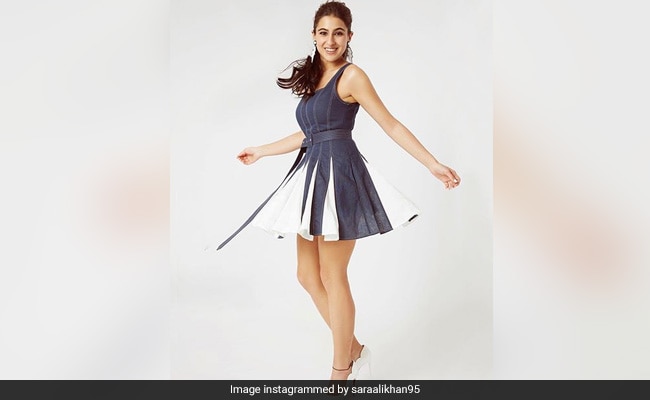 To say we missed Sara Ali Khan's poetry would be absolutely right. The 25-year-old actress, busy with promotional duties for her new film Coolie No 1, couldn't help but share her latest poetic creation on Instagram. Sara, who made seldom social media appearances in several weeks, announced the return Sara Ki Shayari in these words: "Lift and Sit, Turn and Twist, Having fun is the gist, Now I can cross this off my list, As Sara ki Shayari was thoroughly missed, Sorry guys I couldn't resist. Hopefully my poem won't be dismissed." Sara Ali Khan shared a few photos of her twirling in a blue and white dress to go with the poem.

In September, Sara Ali Khan was summoned by the Narcotics Control Bureau in connection to the probe into allegations of drug abuse in Bollywood triggered by the death of actor Sushant Singh Rajput. Sara, who co-starred with Sushant in her debut film Kedarnath, was questioned by the NCB on September 26. Sara's first post after she returned to Mumbai from her Goa holiday was this Dusshera wish: "Wishing everyone happiness, prosperity and success."

Sara Ali Khan will next be seen in Coolie No 1, in which she co-stars with Varun Dhawan. The film was initially slated to open in theatres in May 2020. However, due to the ongoing coronavirus pandemic, it has been rescheduled for a Christmas release. Coolie No 1 is a remake of David Dhawan's 1995 film of the same name. Varun Dhawan co-stars with actress Sara Ali Khan in the movie. In the new film, David Dhawan has cast his son Varun in the role originally played by Govinda while Sara has stepped into Karisma Kapoor's shoes.