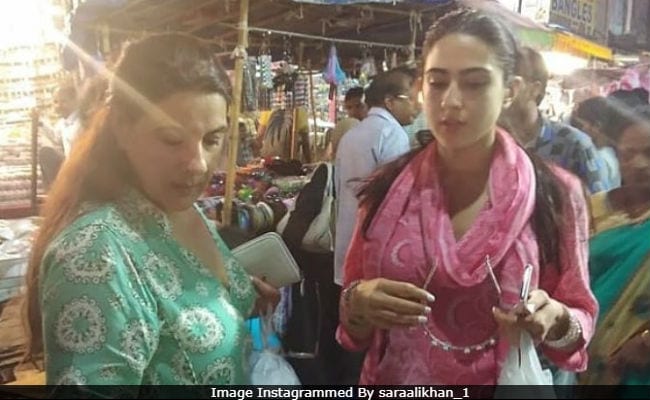 New Delhi: Sara Ali Khan is busy with her new film Simmba in Hyderabad, but she managed to take out time from her schedule to go out for shopping. Sara's fan clubs have shared pictures of the actress on Instagram, in which she can be seen with her mom Amrita Singh. The mother-daughter duo have been pictured buying some accessories in Hyderabad's famous Laad Bazaar, situated close to the Charminar. Sara is dressed simply in a pink suit and holds a white hairband in hand while Amrita Singh checks out the other things. They had reached Hyderabad last week and Simmba went on floors at Ramoji Film City.

A few days ago, Sara's picture with Amrita Singh, appeared to be taken at a gym, went viral.

In Simmba, Sara co-stars with Ranveer Singh. The film is directed by Rohit Shetty. Simmba is a remake of Telugu hit Temper, starring Jr NTR and Kajal Aggarwal.

Here are glimpses from Day 1 of the shoot. Welcome Sangram Bhalerao (Ranveer Singh).

Of making the film with Ranveer, Rohit Shetty had earlier told news agency IANS, "I couldn't have imagined making Simmba if not for Ranveer Singh, because he is the only actor who has the strength to pull out such a character."

Promoted
Listen to the latest songs, only on JioSaavn.com
Simmba, co-produced by Karan Johar, releases on December 28.