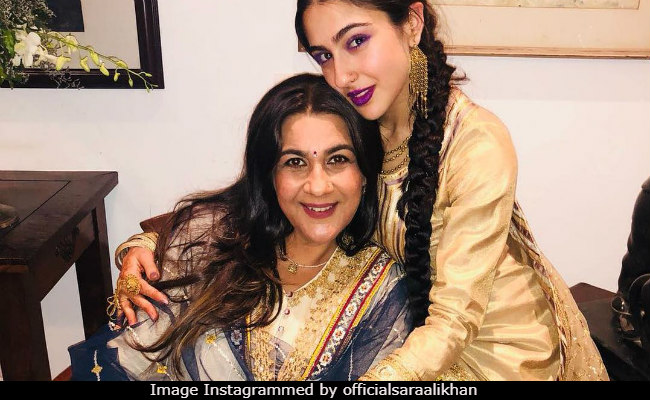 New Delhi: Actress Sara Ali Khan and mom Amrita Singh recently attended a get-together, dressed in gorgeous picks from the studio of designer duo Abu Jani and Sandeep Khosla. Photos of the mother-daughter duo have been shared on social media and has sent the Internet into some sort of a meltdown. Both Sara Ali Khan and Amrita Singh opted for outfits in hues of gold and white, setting the Gold Standard of twinning goals. Sara paired a short gold kurta with flared and ruffles palazzo pants and a sheer dupatta. Amrita chose a white anarkali with golden work to go with a blue dupatta. Sara looked particularly stunning as she accessorised with heavy gold jewellery and finished her braided hairdo with gold latkans.

We also spotted actress Amrita Singh's former co-star Dimple Kapadia along with the mother-daughter duo. Dimple Kapadia and Amrita Singh have co-starred in films such as 1992's Dil Aashna Hai and 1989's Batwara. Dimple looked resplendent in an ivory saree, also by Abu Jani Sandeep Khosla, and teamed it up with a blue blouse.

Promoted
Listen to the latest songs, only on JioSaavn.com
This is not the first time that Sara has opted for the designer duo. Remember how she arrived for Anushka Sharma and Virat Kohli's Mumbai reception in a mint green lehenga by Abu Jani Sandeep Khosla? Last year, Sara was also spotted in a bright pink embroidered anarkali by the designers at the Ambani Diwali party.

Sara Ali Khan who was all set to make her Bollywood debut with Abhishek Kapoor's Kedarnath, will actually have Rohit Shetty's Simmba releasing first as the former was rescheduled. Sara co-stars with Sushant Singh Rajput in Kedarnath and Ranveer Singh in Simmba.