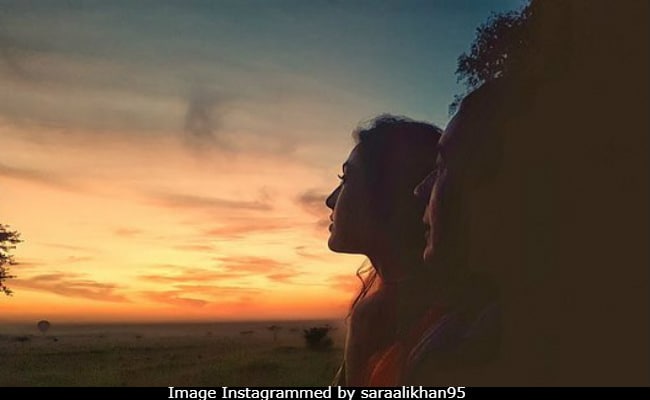 Two films done and now, it's vacation time for Sara Ali Khan! No points for guessing that Sara Ali Khan's favourite travel buddy is none other than her actress mother Amrita Singh. The mother daughter duo are holidaying in Kenya, from when Sara sent the first post-card on Instagram. Sharing an album featuring herself and Amrita Singh, she wrote: "Wilder and wildest in the wild." Sara and Amrita's photo appears to be from a safari at Kenya's Masai Mara National Reserve. In the photo, silhouetted versions of Sara and Amrita can be seen and she added these tags to it: "#motherdaughter", "#hakunamatata" and "#pinksky." Hakuna matata indeed!

Sara Ali Khan, who is the daughter of Saif and his first with Amrita Singh, often talks about the role of her mother in shaping her career. In a recent interview to news agency IANS, Sara said Amrita Singh would often confiscate her books for being overtly "nerdy": "...I used to keep studying and there was a time when my mother used to confiscate my books because she would say it's not normal to study so much," she said.

Amrita Singh often features in Sara's Instagram posts and here's just a few of our favourites.

Sara Ali Khan kick-started her journey in Bollywood with Kedarnath and then starred in Simmba after that. She is currently said to be in talks with the makers of Love Aaj Kal 2. As per reports, she is all set to co-star with Kartik Aaryan and Saif Ali Khan in the film.