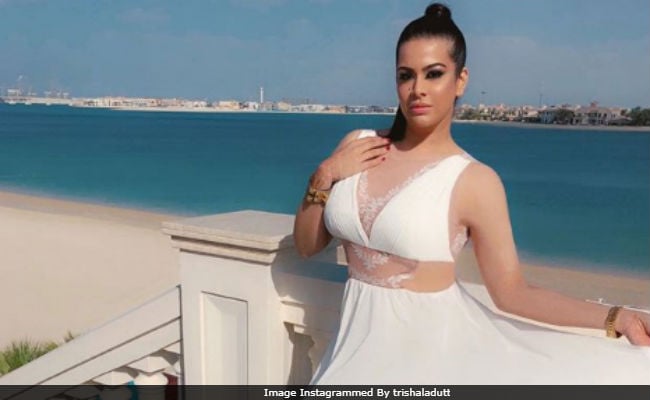 New Delhi: Actor Sanjay Dutt's elder daughter Trishala has gained one of the top most spots on Tuesday's trends list, courtesy her stunning pictures from Dubai. Trishala, dressed in a beautiful white dress, sits beside a swimming pool and poses against the camera. "The art of wishing you were wishing I was there," she writes. "You look just fantastic" and "What a pretty woman in a wonderful dress," are some of the several comments posted on Trishala's picture. In another picture shared by her, she wears a beautiful white gown and poses near a beach in Dubai. The picture, shared a couple of weeks ago, has been taken at the famous The Palm - Jumeirah (Dubai).

Here are five best pictures of Trishala. (You're welcome).

the art of wishing you were wishing I was there.

Our favourite - Trishala with her dad Sanjay Dutt. She shared with the picture with hashtags like, "Lots of laughs," "Lots of hugs," "Lots of Fun," and "Lots of Love." The Dutts celebrated New Year in Dubai. Trishala partied with step-mom Maanyata. Sanjay Dutt and Maanyata's twins Iqra and Shahraan were also there.

Promoted
Listen to the latest songs, only on JioSaavn.com
Seen the family portrait yet?

Trishala is Sanjay Dutt's daughter with his first wife Richa Sharma. The 58-year-old actor released the trailer of his last released film Bhoomi on Trishala's birthday. Bhoomi was Sanjay Dutt's comeback film. During the trailer launch in Mumbai, Trishala's heart-warming letter addressed to he dad, was played as a voice note. "My dearest papa dukes, it feels so nice to know that you've chosen to launch the trailer of Bhoomi on my birthday as a surprise. It gives me so much joy to know that you've chosen a film based on a father-daughter relationship as your comeback film as well. I'm really proud of you Dad. You are stronger than you know. I'm blessed to be a part of you. I love you forever, Trishala," she wrote in the letter.
Comments
Sanjay Duttsanjay dutt trishala