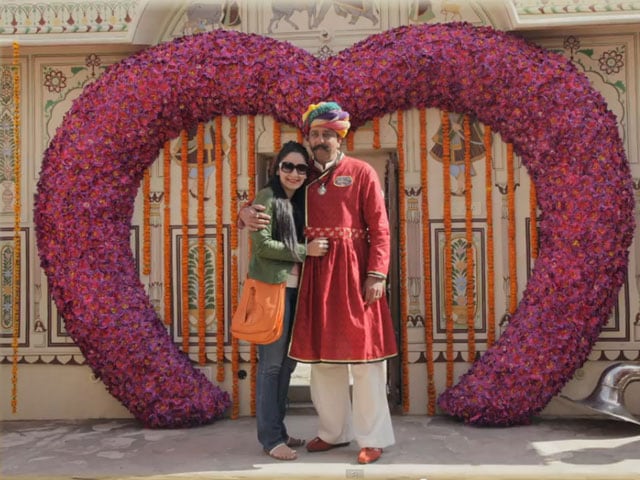 This is how actor Sanjay Dutt bagged a role in what could be the year's biggest blockbuster. While casting Aamir Khan's best friend Bhairon Singh in PK, producer Vidhu Vinod Chopra picked the now-incarcerated actor as he was looking for a big man to hug and highlight the central character PK's tiny frame.

The Munnabhai star, once the bad boy of Bollywood, was a treat to have on set. PK director Rajkumar Hirani said, "I have seen a huge change in Sanju's personality over the years. He used to be half-an-hour early on the sets every day. Sanju is a sweetheart. Wherever he goes, he makes everyone happy."

Raju Hirani also praised Sanjay Dutt's ability to carry off any costume and look for a film. The actor will be seen as a traditional >bandwaala - moustache, turban and all - as "honest friend" Bhairon Singh.

The crew and bandwaalas of PK also celebrated Sanjay Dutt's wedding anniversary on the sets of the film, in the presence of his wife Maanyata and children Shahraan and Iqra.

The last day of filming was a difficult one on set. He was sent to Pune's Yerawada Jail soon after, to serve the remainder of his five-year jail sentence that the Supreme Court handed him in a conviction related to the 1993 Bombay Blasts.

PK producer Vidhu Vinod Chopra said, "Sanjay is so close to me that I feel his presence all the time." He also mentioned that he will start shooting Munnabhai 3 with the actor the day he is released from jail.

Sanjay Dutt, who writes Mr Chopra letters from jail, said he will always be up for a Vidhu Vinod Chopra film, even if it is for one shot.

Promoted
Listen to the latest songs, only on JioSaavn.com
PK, co-starring Anushka Sharma, is slated to release on December 19.