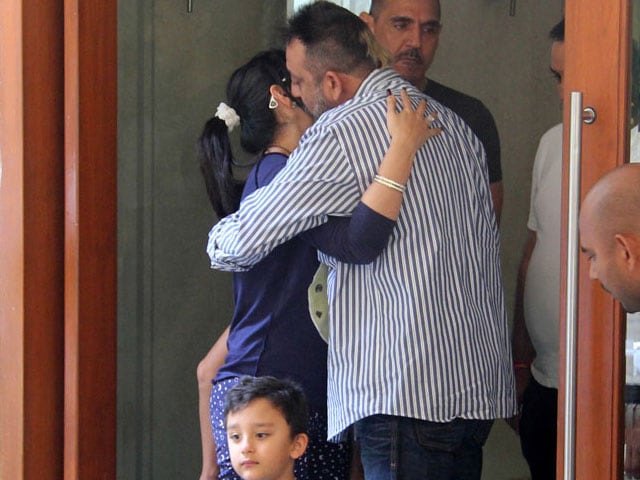 Mumbai: Actor Sanjay Dutt, who will be released from Pune's Yerawada Central Jail on Thursday, will reportedly spend the day with his family. The 56-year-old actor served 42 months in prison as a part of his five-year sentence after being convicted in the 1993 Mumbai serial bomb blasts case.(Also Read: Sanjay Dutt Leaves Jail, Rishi Kapoor Welcomes Him Back in Tweet)

"He will take a charter from Yerawada Central Jail to Mumbai. He won't be partying immediately after his release. He will offer prayers at Siddhivinayak temple and then go to his mother's (Nargis) grave in Marine Lines," a source told IANS.

"There is a portrait of his father (Sunil Dutt) in his building in Pali Hill. There will be a small puja there. It will be basically a relaxed day with his family," the source added.

Sanjay Dutt has served more than 50 months in two installments excluding the parole and furlough he was granted at various times on different grounds.

He spent 18 months in jail as an undertrial before he was granted bail and later, following a Supreme Court order in May 2013, he was sent to the Yerawada Jail to serve the remaining 42 months of his five-year sentence.

A Mumbai restaurateur will offer a special culinary delight 'Chicken Sanju Baba', free of charge to all patrons and fans to celebrate the actor's release.

Meanwhile, many filmmakers have shown interest in working with the Khalnayak star.

National Award-winning director Umesh Shukla said he had a film for Sanjay Dutt.

"Sanjay liked my subject. We will get to know the status of the film once he returns home. First of all, he needs to be with his family. That's his priority. As far as the film is concerned, he certainly liked my script, which I narrated to him last year. The script suits him the best. It's content-oriented subject," Mr Shukla had earlier told IANS.

Filmmaker Vidhu Vinod Chopra, a close friend of Mr Dutt, said the actor 'committed a mistake and paid for that. Now it's his new birth and we are with him'.

He also revealed that the pre-production of the third part of Munnabhai franchise was in full swing.

Filmmaker Subhash Ghai had a special message for him.

"If I know Sanjay like he was during Vidhaata and Khalnayak, he will come out this time with much more maturity and a greater sense of responsibility as a human, a family man and also a star. He just wants to focus on his career as an actor and nothing else. That's what he told me two months back," Mr Ghai said in a statement.