Sanjay Dutt, Set To Resume Work, Says, "Will Be Out Of This Cancer Soon"

"It's good to be back," Sanjay Dutt said in the video. 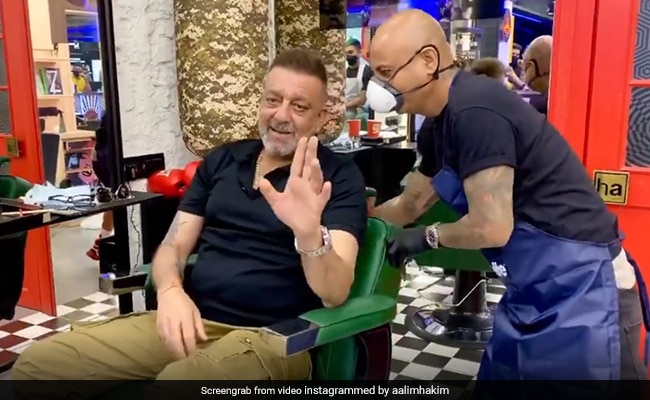 Sanjay Dutt in a still from the video. (courtesy aalimhakim)

Sanjay Dutt, who took a break from work because of health related issues, recently visited a salon for a haircut. Celebrity hairstylist Aalim Hakim shared a video of Sanjay Dutt, which is going insanely viral on social media. In the video, the actor talked about being diagnosed with cancer for the first time and revealed that he all set to be back at work. "Hi, this is Sanjay Dutt. Good to be back in the salon. Got a haircut. If you see this, this is a recent scar in my life, but I will beat it. I will be out of this cancer soon," the actor said in the video. Sanjay Dutt announced that he is taking a break from work because of his health issues in August. A few days after that, he told the paparazzi outside his home: "Pray for me," while leaving for the hospital. After his announcement, the Panipat actor was spotted visiting Mumbai's Kokilaben Hospital a few times, where he is said to be going for treatment.

The actor flew to Dubai on a chartered flight with his wife Maanayata earlier this month. He met his kids Shahraan and Iqra there and recently returned to Mumbai. He will begin dubbing for his film Shamshera, with Ranbir Kapoor and Vaani Kapoor. He said, "I had shaved, but I need it for my look in KGF, which we are starting in November. I am happy to be back on the sets again. Tomorrow, I will be dubbing for Shamshera, so that will be fun. It's good to be back."

In August, Sanjay Dutt's wife Maanayata warned against "unwarranted rumours" about the actor's health in her statement. "It is my heartfelt request to Sanju's fans to not fall prey to speculations and unwarranted rumours, but to just help us with their ongoing love, warmth and support. Sanju has always been a fighter, and so has our family. God has yet again chosen to test us to overcome the challenges ahead. All we seek is your prayers and blessings, and we know we will emerge as winners on the other side, as we always have. Let us use this opportunity to spread light and positivity," read an excerpt from her statement.