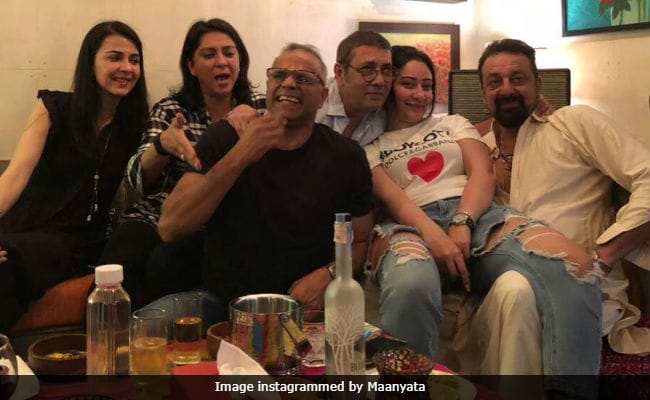 New Delhi: Actor Sanjay Dutt and his wife Maanayta celebrated their 10th wedding anniversary with only Sanjay's sisters and brothers-in-law in attendance. Priya Dutt, who is also a Congress leader, is married to Owen Roncon while Namrata is married to Kumar Gaurav, who has featured in films like Love Story and Janam. The six-pack family looked extremely happy celebrating Sanjay Dutt and Maanyata's big day. "Crazy is a relative term in my family. My temperamental family - half temper and half mental. Just loving this night." Of course, Maanyata missed Trishala - she said so in comments.

Owen Roncon also posted a picture from the party night, which shows that the Dutts are just as "crazy" as Maanyata mentioned in her post.

Tonight no khaana for sure.... @maanayata @pdr66 @namrata62 @duttsanjay

Maanyata is Sanjay Dutt's third wife. He was marred to Richa Sharma from 1987 to 1996. Richa died due to brain tumor. Trishala is Sanjay Dutt and Richa's daughter. He then married Rhea Pillai in 1998 and the couple divorced in 2005. Sanjay Dutt married Maanyata in 2008 in a private ceremony in Goa. They are parents to seven-year-old twins Shahraan and Iqra.

Sanjay Dutt has also signed up for the third Munna Bhai film with director Rajkumar Hirani, who has made a biopic on the actor, with Ranbir Kapoor in lead role. Dia Mirza plays the role of Maanyata in the film.