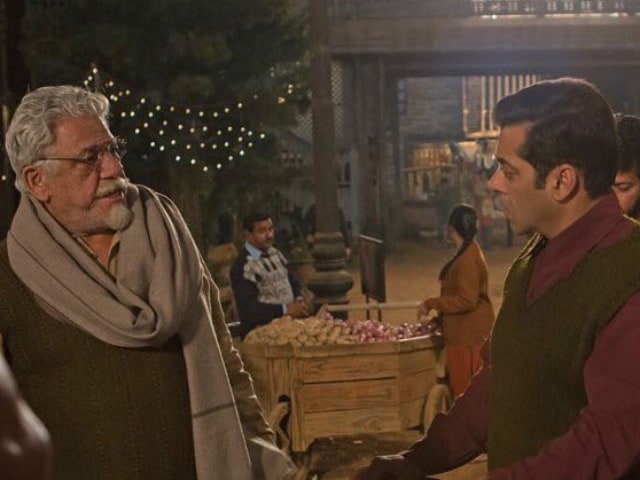 Salman Khan and Om Puri on the sets of Tubelight (courtesy: BeingSalmanKhan )

New Delhi: Bollywood is left with a giant void after Om Puri died of a massive heart attack on Friday morning. It was a fact less known that the 66-year-old veteran actor was working for Kabir Khan's Tubelight, which stars Salman Khan in the lead. After news of Om Puri's death broke, the actor was remembered with admiration on Twitter. Salman Khan, who shared a picture from the sets of the film on Friday, wrote: "Lost one of the most iconic actors." The picture features Salman Khan in his signature Tubelight-special half sweater and shirt while Om Puri is also dressed for the cold with a shawl around his neck. Both Salman and Om Puri appear busy in conversation.

This is what Salman Khan shared on Friday:

So sad. Lost one of the most iconic Actors, RIP Om Puri ji pic.twitter.com/03r494WG8E

Salman Khan also shared a snippet of popular TV show Aap Ki Adalat featuring Om Puri. The short video clip shows Om Puri saying one of his most iconic dialogues from 1983 laugh riot Jaane Bhi Do Yaaro. He also mentions in the video that this particular clip must find place in his obituary.

Meanwhile, Kabir Khan also posted emotional messages on Twitter: "I will miss that warm tight hug that you gave me every morning on set. Khudahafiz sir... you were the best."

Omji... u were laughing with us on set jst a few days ago! We have lost one of the greatest actor & the warmest person in the film industry

Om Puri is best admired for cult movies like Ardha Satya, Aaksrosh, Sadgati, Maachis and Jaane Bhi Do Yaaron, died of heart attack in Mumbai. In the 'nineties, Om Puri shifted focus from Bollywood and art films to star in British projects like East Is East, (1999), My Son the Fanatic (1997) and 2001's The Parole Officer. His Hollywood films include The Ghost and the Darknessand Charlie Wilson's War, in which he co-starred with Julia Roberts and Tom Hanks. He also shared screen space with Helen Mirren in comedy drama The Hundred-Foot Journey. Om Puri has also made significant appearances in more recent Bollywood films like Singh Is Kinng, Hera Pheri and Malamaal Weekly. Om Puri voiced the character of Bagheera in the Hindi version of 2016's The Jungle Book.

Promoted
Listen to the latest songs, only on JioSaavn.com
Tubelight kicked off in Ladakh earlier this year and have also extensively filmed in Himachal Pradesh. Salman Khan co-stars with Chinese actress Zhu Zhu in Tubelight, which is the 52-year-old actor's third collaboration with the director after Ek Tha Tiger and Bajrangi Bhaijaan.

Salman Khan was last seen in wrestling drama Sultan and also has the sequel of Ek Tha Tiger lined up.