Salman Khan Revealed This About Shah Rukh's Film. Is There More to it? 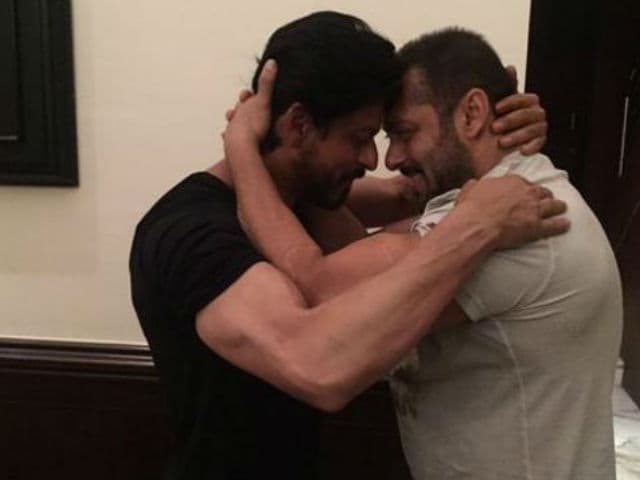 New Delhi: If you were wondering what was the purpose of Shah Rukh Khan and Salman Khan's meeting on Monday night, the two aren't sharing screen space any time soon. But they have been known to pitch each other's films and support the other in ways they know best. Shah Rukh Khan, dressed in black, was photographed arriving at Salman's Galaxy Apartments in Mumbai on November 28, along with Salman's family members like sister Alvira and her husband Atul Agnihotri, brothers Arbaaz and Sohail Khan, and friends like director-producer Sajid Nadiadwala and actor Suniel Shetty. So on Tuesday, Salman was teasing fans with a special announcement at 7 pm (sharp as he promised in another tweet) and here it went:

With Salman's next film with Kabir Khan, titled Tubelight, scheduled for Eid in July 2017, the actor has made sure the festivities continue through the Independence day weekend with another Khan.

Meanwhile, it wasn't just Salman - SRK's Dear Zindagi co-star Alia Bhatt too tweeted but she had other concerns.

August is tooo far away ya!!!!! @AnushkaSharma@iamsrk.. Am saving the date immediately.. But Imtiaz what to put in as the title???#CantWaitpic.twitter.com/Jme1LrPG4K

Funnily enough, while Alia and Salman were updated about the film's release date, the lead pair - Shah Rukh and Anushka Sharma - were clueless:

Arre I had no idea we are still searching for the title. What to do now??? Go with this date or wot?? https://t.co/wQc4B2OoxC

Meanwhile, celebs have joined the hunt to look for a title for the Imtiaz Ali-directed film, because the release date won't be changed, as we gathered from Anushka and SRK's conversation:

Both are at the top of the list. Just shopping around last minute like u do for clothes!!! https://t.co/yi702UER8C

Promoted
Listen to the latest songs, only on JioSaavn.com
The film is tentatively titled The Ring and has been exhaustively shot in Budapest, Prague and Lisbon. This is Anushka Sharma's third film with Shah Rukh Khan after her 2008 debut Rab Ne Bana Di Jodi and then Jab Tak Hai Jaan. Shah Rukh also had a cameo in Anushka Sharma's Ae Dil Hai Mushkil, though they did not have any scenes together.

Anushka's other work-in-progress is Phillauri, co-starring Diljit Dosanjh while Shah Rukh Khan will begin work on a film with Aanand L Rai, in which he reportedly plays a dwarf. Shah Rukh was last seen in Gauri Shinde's Dear Zindagi and also has Rahul Dholakia's Raees set for release in January.