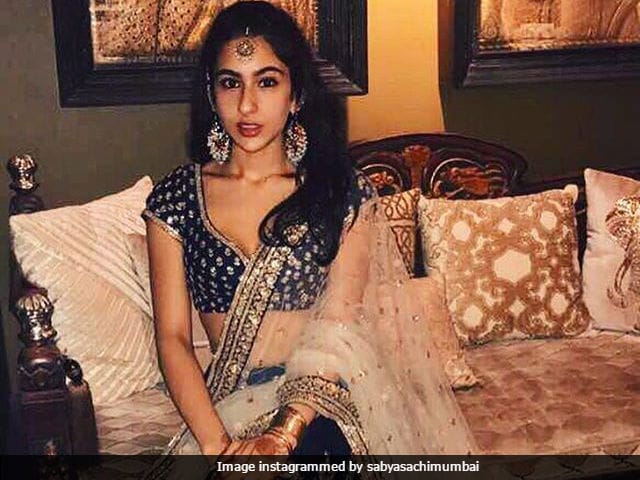 Sara and Aayush may debut together in Salman's film. (Images courtesy: sabyasachimumbai)

New Delhi: Everyone knows that Salman Khan is planning a big Bollywood debut for his brother-in-law Aayush Sharma, who is married Salman's sister Arpita Khan Sharma. The latest report around the project is that Salman Khan is also considering launching actor Saif Ali Khan's daughter, Sara Ali Khan in the film opposite Aayush, reports Mumbai Mirror. "Sara has heard the script, a love story, and is expected to come on-board soon," a source said. Sara is Saif Ali Khan's daughter from his first wife, actress Amrita Singh. A lot has been written and scratched about Sara Ali Khan's Bollywood debut. In February, while promoting his film Rangoon, Saif confirmed that Sara will start her career with a Karan Johar-film. There were also reports that Aayush's debut film will be co-produced by Karan Johar. But Mumbai Mirror's source refuted this scoop and said: "There've been speculations that Karan Johar is co-producing the film but that's not true."

KJo has famously mentored actors like Alia Bhatt and Varun Dhawan, who enjoy a fabulous reputation in the film industry today. The film in question is a sequel to Student Of The Year for which Tiger Shroff has already been confirmed.

Promoted
Listen to the latest songs, only on JioSaavn.com
As of now, there hasn't been an official announcement about Sara Ali Khan's Bollywood debut film and even then, Saif and Amrita's daughter is social media's favourite. Check out her pictures from a reported photoshoot for designer Sabyasachi:

A post shared by Sabyasachi Mukherjee (@sabyasachiofficial) on May 7, 2017 at 2:37am PDT

Aayush Sharma is the son of Himachal Pradesh-based businessman-politician Anil Sharma. His grandfather was the former union communication minister and Congress leader Sukh Ram. He married Arpita in a lavish ceremony in Hyderabad's Falaknuma Palace in November 2014 and the couple has a son named Ahil, who was born last year.